Liberating Education, Art and Science: A Summary of the 5th Annual ADTE Conference

On May 2nd, 2018, more than 100 members of the higher education community in Quebec and international guests gathered at UQAM’s J.-A.-DeSève Pavilion to share and learn about best practices for removing barriers to the free circulation of educational resources, research, data, software and art. This important event received the support of the Ministère de l’Éducation et de l’Enseignement supérieur, and included presentations from Federal, Provincial and international stakeholders.

The day began with a greeting from UQAM’s Rector, Magda Fusaro , who believed the event to be of such importance that she decided to clear her agenda to participate in the activities and interact with the speakers and conference attendees.

…today we will be ...in a universe that has no boundaries and that recognizes openness as one of its fundamental values that permits the creation and broadcast of knowledge, we will also take part in this spirit of collaboration which is so dear to the communities of the Libre movement. 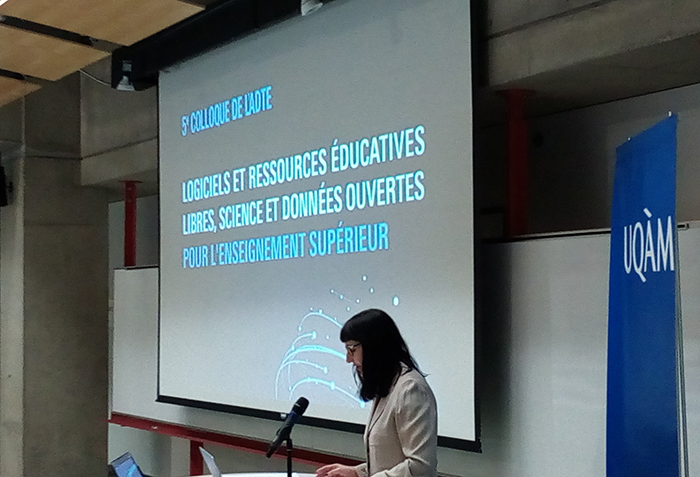 The presentations for the day began with educational researcher Thierry Karsenti, who provided a thought-provoking talk on Open Educational Practices. Rather than focusing merely on the act of sharing learning resources, he encouraged attendees to consider how the process of creating open educational resources can contribute to the overall quality of the educational experience by “inducing positive changes in teaching and learning.” [Translation]

To stimulate further reflection, Thierry Karsenti presented 22 ideas to promote the adoption of open educational practices. Among these, the concept of 4 R’s (reuse, rework, redistribute and recombine) within open educational practice were well-received and expanded upon by the conference participants during the Q&A period, who suggested ensuring the renewal of educational resources to ensure that they stay current and relevant.

The ADTE conference also shed the spotlight on the open practices of libraries in higher education, with presentations from both the college and university level.

Anne-Frédérique Champoux, the community leader for the REBICQ (Regroupement des bibliothèques collégiales du Québec) presented an update on the work of librarians within Quebec’s college network. A survey of librarians conducted in 2017 revealed that a large proportion of them supported the philosophy behind the open movement. Many are engaged in sensitizing library users on the open movement. The librarians may collaborate on projects to develop open pedagogical material with teachers or have open source software installed on workstations in the library (GIMP, Firefox, LibreOffice suite, Audacity, Freemind, etc.). Anne-Frédérique foresees a future where librarians are increasingly solicited by teachers to collaborate on the development of open textbooks and other open educational resource development projects.

From the university network, Dany Bouchard, the coordinator of research and support services for the UQAM’s library service spoke about open access to learning resources. Part of his presentation underscored the importance of attributing a Creative Commons licence when creating and sharing Open Education Resources (OERs). The UQAM libraries have recently published an on-line guide to OERs in French. He also mentioned that UQAM has a website that covers the topic of open access and an on-line guide to building a thesis and dissertations that is licensed under Creative Commons (CC-BY).

There were multiple presentations dedicated to the free circulation of research results and data during the course of the day.

Dr. Guy Rouleau, Director of the Montreal Neurological Institute (MNI) affiliated with McGill University provided a well-received talk on Giving Life to Open Science at the MNI. By “opening science,” the MNI hopes to accelerate research into cures for the principal neurological illnesses, like early dementia, Alzheimer’s disease or multiple sclerosis. The MNI, which is also referred to as “the Neuro” received a $20M dollar endowment from Laurence and Judith Tanenbaum to launch the 5-tier Tanenbaum Open Science Initiative, which includes :

A legal representative from the Scientifique en chef du Québec present at the ADTE conference also spoke of the importance of the MNI’s initiative, stating that they are convinced that their work will bring about a transformation in the way research is done internationally and result in a culture-change where data and results are considered to be common goods, especially when they are supported by public funds.

Indeed, the ADTE conference demonstrated that both federal and provincial governments are in tune with the trend towards opening up research by providing citizens with more access to data, which will contribute to the resolution of complex problems. UQAM Rector Magda Fusaro had noted earlier in the day  that :

The mobilization of knowledge stemming from research is, to be sure, very important, much like the popularisation of science. But publishing research and its data can be an additional asset for the research itself, if it is freely available. To disseminate the research, it needs to be shared without barriers.

Representatives from Ottawa and Quebec City also shared what our governments are currently doing to provide citizens with more access to data.

Jaimie Boyd, the Director of Open Government from the Treasury Board Secretariat of Canada spoke to ADTE conference participants about federal initiatives to increase open access to data. This movement hopes to increase the efficiency of the public service’s response to a variety of wants and needs expressed by Canadian citizens. These initiatives have resulted in a number of searchable sources for data, including maps that can be accessed from the federal open government website.

Another federal agency, Statistics Canada, was present at the ADTE conference. Gabrielle Beaudoin, Director General of Communications and Distribution, and Louise Gosselin, Associate Director for the Eastern Region, presented Statistiques Canada à l’heure des données ouvertes. The federal government is currently engaged in the digitization of data sources and providing more specific sets of data known as microdata for smaller populations. These data sets will help stakeholders by providing input into decision-making processes in the near future. There is also an initiative to increase data on gender, diversity and inclusion to promote democracy for all citizens. The speakers reminded the attendees that the colleges and universities are regular clients, and that Statistics Canada offers outreach activities, including a variety of presentations and webinars to interested educational establishments that require support for using the data their agency provides.

The Government of Quebec was represented by Steve Gauthier, Director of Open Government and Free Software for the Secrétariat du conseil du trésor. He spoke about the government initiatives that took place between 2012 and 2017 and the current projects that will continue until 2022. These initiatives are designed to ensure:

For those interested in more information, the government has published a guide outlining their guiding principles for open data (in French).

Freeing software and conserving its heritage

True to the tradition of prior ADTE conferences, this year’s conference included presentations from influential members of the open software community.

Free software pioneer Richard Stallman from the Free Software Foundation which is responsible for the publishing of the GNU General Public Licence provided a talk on freeing software in education and the dangers of closed hardware and software frameworks.

Roberto Di Cosmo, an IT professor from the Université Paris Diderot, spoke to the ADTE conference participants about an ambitious initiative he is leading called Software Heritage which seeks to archive free and open source code for software. Given that software is everywhere, from the servers that host our cloud-based office productivity software, to cell phones and even pacemakers that monitor a person’s heart, it is important that we archive this code and share it for the public good. At the time of writing, the Software Heritage archive contains 4,536,067,027 files and is increasingly gaining the financial support of organizations like Microsoft, Intel, Huawei and others.

Acknowledging past artists and freeing artwork

In what was one of my favourite presentations of this year’s conference, French-American artist Gwenn Seemel provided an entertaining look into the personal reflections that led her to decide to make her art available as part of the public domain. 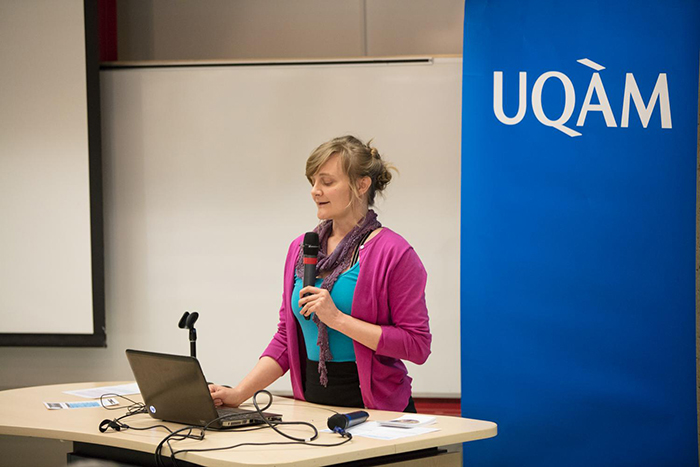 Gwenn assured us that many artists draw on other artists as part of their education and developing their own style. It should only be appropriate that this be acknowledged openly by the artistic community. Gwenn showed comparisons of her art and classic paintings that helped her resolve issues that would arise when she was creating her own works. For some lovely examples of this, you can view her presentation slides.

As the Ministry looks forward to implementing the Stratégie numérique for Quebec, it is reassuring to have organizations like the ADTE provide us with opportunities to reflect on important considerations like the open publication of data and research before we mobilize the stakeholders at various levels of education.

True to the spirit of the conference, the organizers have made all the presentations from the conference openly available on the ADTE website (in French). 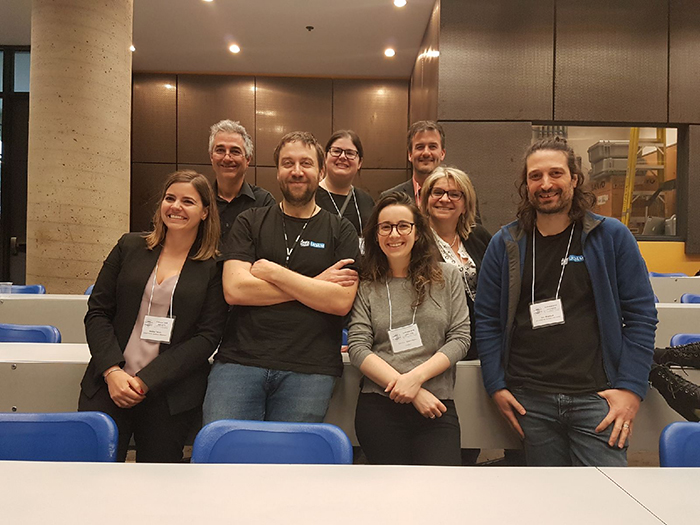 Congratulations to the ADTE administrators and all of the UQAM personnel that worked to ensure that the 5th Edition of the ADTE Conference was a success. The ADTE has already begun to work on next year’s conference, which will take place in Quebec City!