The Quebec college network is a dynamic place where stakeholders often work across institutional borders to advance higher education in the province. For me, there are few people that embody the network’s culture of sharing and collaboration more than Rafael Scapin, the mild-mannered intellectual educational technologist with a soft Brazilian accent from Dawson College. His vast knowledge of techno-pedagogical approaches and more specifically, his guru status with the Moodle learning management platform have made him somewhat of a celebrity in the college network! But there’s much more to him than meets the eye! 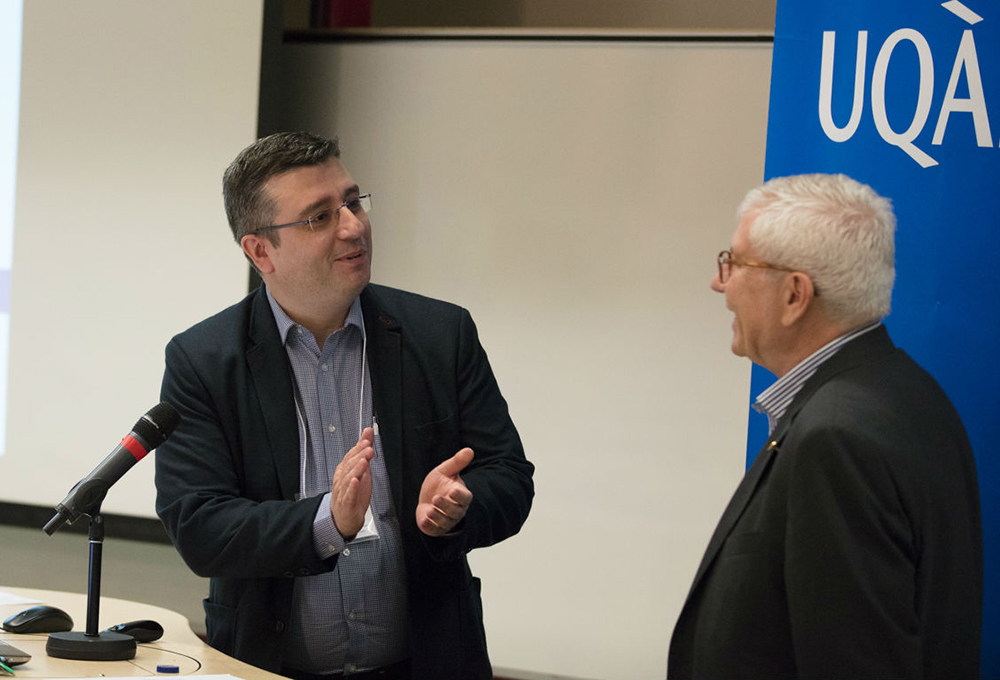 Rafael grew up in southern Brazil in a smaller city with 30 000 people in the state of São Paulo. Many of the residents are descendants of Italian immigrants who moved across the ocean in the 19th century. Rafael is part of the first generation that was allowed to return to Italy to reside in the country if he so chose. From an early age, he took it upon himself to learn Italian and went on a student exchange in Italy while he was a high school student.

Following his high school years he enrolled in the Physics program for his undergraduate degree at the São Carlos campus of the University of São Paulo. Upon graduation, he enrolled for a Masters degree in Computational Physics. As if that weren’t enough, he decided to pursue doctoral studies and earned a Ph.D. in Computational Physics and e-Learning! Rafael informs me that he was working with an early form of artificial intelligence to detect at-risk students and send alerts. At age 29, he presented the thesis for his Ph.D, which revolved around Educational Intelligence.

Rafael began lecturing in the Brazilian university system and stayed there for about 3 or 4 years. This is when he started looking abroad for his next challenge.

What to say about Rafael Scapin? Do you mean aside from the fact that he is a kind, brilliant, hard-working, and generous colleague? Incredibly knowledgeable, a polyglot, always willing to help, well-organized, a team-player, innovative, dedicated to continually learning, helping others, and supporting a free, open-source Internet?

A man of the world

From a young age, Rafael dreamed of moving to another country. He went to Europe a few times and still loves to visit, but he decided he didn’t want to live there. He started looking into international immigration programs and noted that Australia, Canada and New Zealand had compatible immigration programs.

Rafael thought Canada would be a nice place to live and applied for permanent resident status. He quips that he is not a typical Brazilian, since he likes the cold. He fondly remembers the first time he saw snow and his first experience tasting a few snowflakes.

A good Brazilian friend with a training company in Toronto gave Rafael his first Canadian contract to put on his CV. He worked with companies to provide Moodle services, training and support, an expertise that he had already developed in Brazil. 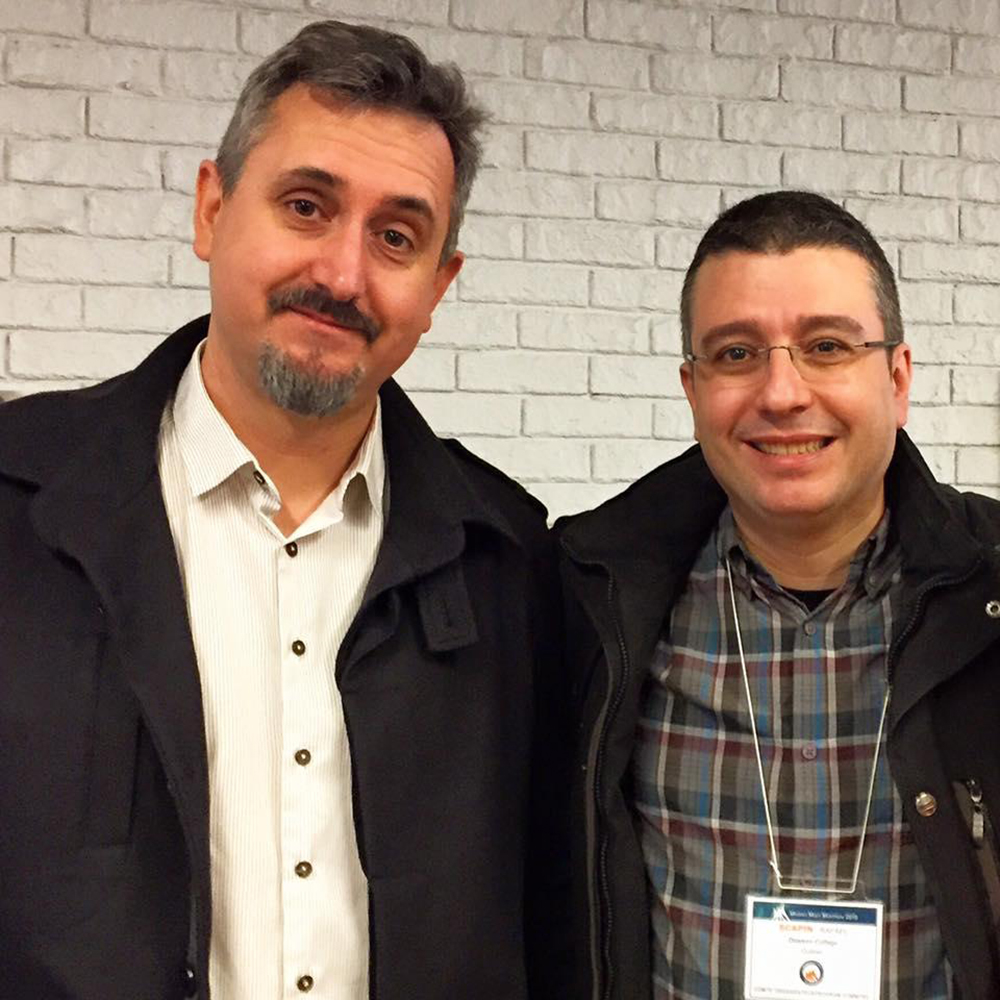 From L-R: Moodle creator and president Martin Dougiamas with Rafael Scapin, Ph.D at the 2015 edition of the Canadian MoodleMoot conference in Montreal (Courtesy: R. Scapin).

A head start with the Moodle platform

While many higher education establishments in North America had started working with the WebCT learning management system, when Rafael began lecturing in universities in Brazil, he used the Moodle free and open source platform.

Around 4 or 5 months into his time in Toronto, Rafael saw a job posting at Dawson College. The stars really seemed to be in alignment for Rafael, whose second phase job interview asked how he would go about migrating away from the WebCT platform to another solution! It was during this interview that he proposed that Dawson College adopt Moodle as a solution.

The migration to Moodle became his first mandate at Dawson College and remains one of his proudest accomplishments. After analyzing 10 different possible solutions, Moodle came out on top. A decision was made by Dawson’s senate to adopt Moodle.

Rafael worked with a former Moodle HQ team member who happened to be in Montreal at the time to port the courses from WebCT to Moodle in only 9 months. Dawson was the second or third college to implement the solution at the time. Rafael was initially hired for a 2-year term. When his predecessor announced he was leaving, Rafael was tenured at the college and has moved from strength to strength ever since.

For a few years now, Rafael has not only become a reference for his English IT-REP peers for all things Moodle, he has also provided plenty of advice to the French network, especially with regards to solutions for integrating Moodle with the most prevalent student management platform in Quebec. Rafael has been on the organizing committee for the last 4 MoodleMoot Canada conferences and organizes an annual Moodle Day at Dawson college for faculty which is open to attendees from other colleges.

To say that Rafael is collaborative is an understatement. He is kind and always eager to discuss and share new ideas. At lunch, following yet another successful Moodle Day at Dawson College, the group laughed together and joked that rather than "Ask Google" - we just needed to "Ask Rafael", as he is a wealth of information. It is inspiring to see that someone so heavily invested in technology also takes the time to learn about and appreciate other interests ranging from languages, history, geography and the arts and sciences.

Over the 10 years that I have worked with Rafael, I have greatly appreciated his ever-cheerful disposition and willingness to help. Through his work at Dawson, he has been a huge support to us in our efforts to continually improve our use of Moodle at Heritage. Thank you, Rafael!

Rafael is very generous with sharing his expertise with others. He frequently leads workshops at his college and is invited to speak at events. Without fail, he uploads his presentations to SlideShare with a Creative Commons licence. He is also celebrating 10 years of a technology watch website that he created known as DawsonITE, which has a wealth of links to articles, presentations and videos on education technology trends.

Rafael somehow finds the time to volunteer as president of the ADTE association which promotes the use of free and open source software in higher education, the free circulation of research and art. All this is proof that sharing is part of his DNA! 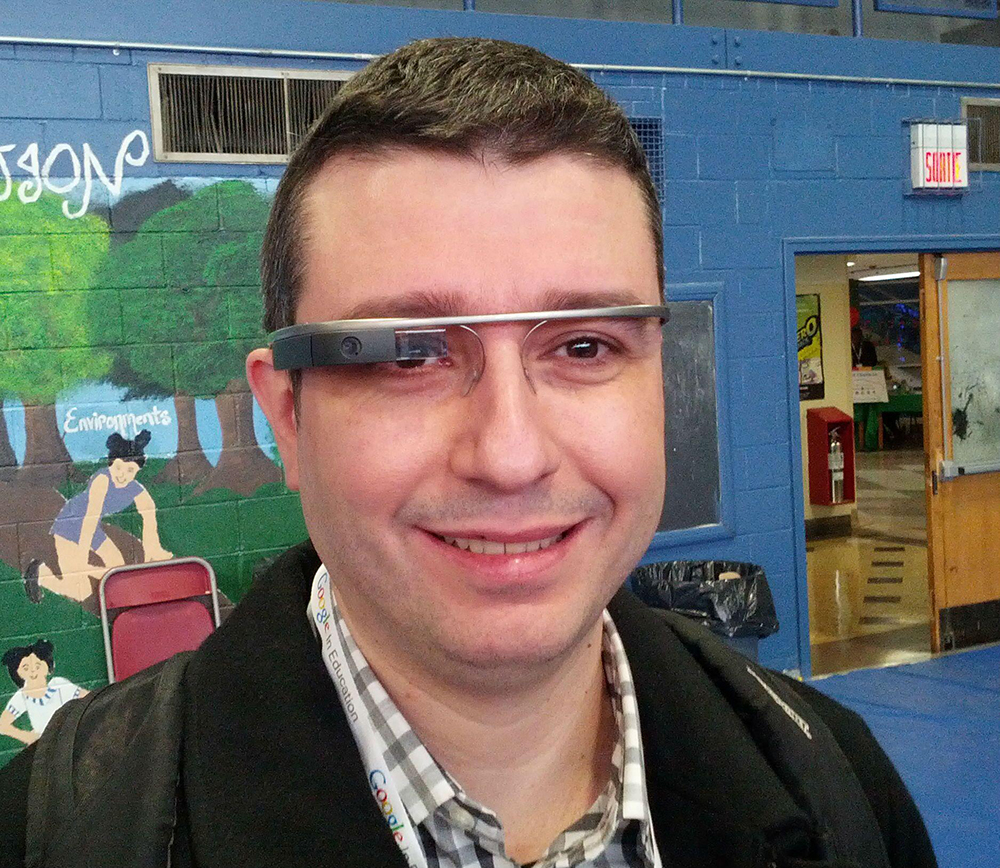 During a recent interview with Rafael, I had the pleasure of hearing more about his insight into approach to guiding teachers after asking the following questions.

What is the source of inspiration in your teaching practice?

When I started teaching computer science and other courses in Brazil, I started with the notion that I knew how to teach. Then reality set in and I saw that some students were not understanding what I was teaching.

I started to put myself in the shoes of my students to try to see why they were not understanding. I decided to try to engage them with real-life problems and make sure that the learning is relevant to them.

I have been inspired by many teachers who have made videos on YouTube showing what they teach and how they teach. I also like TED talks and find them very inspiring.

In the beginning I was very shy when it came to talking in front of people. I managed to fix this and am very comfortable today, even lecturing to a group of teachers. It’s funny, but teaching relaxes me and I continue to teach an Introduction to WordPress course through continuing education. I am so wired after the experience that I can’t sleep for 2 hours after teaching in the evening!

What piece of advice do you have for teachers that want to try out new technologies?

Teachers come to see me sometimes to try new things but they are worried it won't work. I tell them that they should always have a Plan B, like having a printed quiz if a Moodle quiz is not available. I can see that they are very worried about failing in front of the students.

I encourage teachers to attend activities organized by communities of practice. We are fortunate to have a few at Dawson. More and more teachers are trying active learning and working with SALTISE. There is also an E-learning community of practice where teachers are learning and sharing their experience with their peers. It is very motivating to learn from each other and removes some of the isolation for teachers.

What is the recipe for success for EdTech professionals working with teachers within a college?

Don't try to anticipate what a teacher needs. You need to listen to and understand what each teacher in each department needs. There are more than 600 teachers at Dawson. Each department is like its own world. You need to leave your office to talk to those people and find out what they need. Generic workshops don't work for everyone.

There is no one-size fits all. When you understand what teachers and departments need, the rate of success is higher. I am here to listen. Like a doctor, I listen to the problems they need to solve: to see what they need, what they want, and what they already know. In the end, the solution that is chosen may be different from what you initially recommended, and that is fine.

I think it is fair to say that Rafael is professionally hyperactive, but he also has an interesting life after hours! When he does find some spare time, he likes to read e-Books (he is running out of space for physical books in his condo which is steps from Dawson College). They are generally sci-fi books or works about computers, science and languages. He has also started to engage in a lunchtime meditation meeting held in the library at Dawson College which helps him to clear his thoughts.

Rafael enjoys watching movies and discovering new music, attending the many festivals that Montreal has to offer for both of these arts. He takes walks to discover different parts of the city when he can and enjoys international cuisine.

After learning Italian and his international student exchange experience, Rafael has continued to this day to learn more languages. He speaks Brazilian Portuguese, Italian, Spanish, English and French. He learned most of these languages with books, cassette tapes and more recently with the Internet and mobile apps. He says it is much easier to learn languages today with resources like DuoLingo, though he confesses that it took him some time to understand the Quebec French accent and the slang that you don’t find in international French. Word about the Brazilian polyglot with tech-savvy skills got around, and Rafael was approached by the founders of a Montreal language festival and still maintains their website to this day.

With all this interest in languages, it goes without saying that Rafael also loves to travel:

Travel is the best gift you can give to yourself - even more than material things. Travel is magic because you are going to experience so many things that will become a part of you for the rest of your life.

Finally, Rafael is part of a Brazillian-Portuguese meetup group that gets together on a monthly basis in a Portuguese restaurant or café. This probably helps him to keep from getting homesick, though he does get back to Brazil every year to see his family!

The college network is fortunate to have dedicated individuals like Rafael Scapin to guide us through the ever-evolving world of technopedagogical innovation!

For my part, I have watched and learned from Rafael over the last 11 years and have been greatly enriched in my professional life by learning from his example and benefitted from the generous sharing of his knowledge.

Here’s to a couple more decades of the same... Obrigado Rafael!