Is there an educator that you look up to? Have you met someone in the college network that inspires you to try out new things in your educational practice, or simply to be a better person? When working with one of your peers, have you ever found yourself in a situation where you are challenged and stimulated from an intellectual perspective? Alexandre Enkerli is such a person. Gravitating in the same orbit as Alex for close to 2 years now has greatly enriched my experience in the college network, and I am confident that he will inspire you as well.

Alex is a Technopedagogical Advisor from VTÉ (Vitrine technologie-éducation), which is housed at the Collège Bois-de-Boulogne. VTÉ’s partner profile on Profweb states that the organization “plays a leading role in monitoring technical developments and disseminating its findings by means of its website, newsletter, and the virtual labs that it organizes, among other activities.” A generous source of insight and information, Alex has presented in numerous conferences and meetings geared towards higher education since he began working with the organization in 2014. An ethnographer by training, Alex has also been teaching at a variety of post-secondary institutions in the United States and Canada. A card-carrying connectivist, his interest in humans probably explains his very human approach to everything he undertakes.

Alexandre Enkerli addresses international delegates with his presentation on digital badging at the 2nd International Conference on Education in 2015.

As I recall it, the first time I met Alex in-person was at an Education Technology Week event organized by Vanier College’s Pedagogical Development Office in November of 2014. Having previously seen Alex in action at an on-line event earlier in the fall, I jumped at the chance to introduce myself at the Vanier event. Alex is very approachable and constantly looking to make connections with teachers and professionals in the college network.

In the months that followed, Alex proved how well the VTÉ had succeeded in finding a resource to take over the reins for their English Sector. From the moment Alex arrived, he got right to work and was involved in a VTÉ Lab on the important subject of Open Digital Badges that was hosted by both the French and English Sectors of the organization. Often on the cutting edge of education technology, these labs are an opportunity for educators to be initiated to a new or emerging field of interest in technopedagogy. Educators and experts meet and learn from each other in an on-line space. This particular lab attracted participants from around the globe. The VTÉ is always looking for new teachers to participate in these labs, and getting involved is as simple as sending an e-mail to Alex.

Although Alex is not shy to try out new technologies and promote them through showing their pedagogical interest, his priorities are clear:

Technopedagogy is about making sure technology isn’t an obstacle to learning.

In 2015-2016, Alex has been tirelessly organizing events and providing presentations to promote the adoption of open educational practices and the sharing of educational resources. He was one of the volunteer organizers of the Open Knowledge Festival (#OKFestMtl) which was held in parallel to the World Wide Web (W3C) Consortium meeting in April of 2016. Many of the key attendees of this conference are currently working on an event dealing with open education that will take place in the fall of 2016. I’ve had the distinct pleasure of co-presenting with Alex on the topic of Open Educational Resources and Creative Commons licences a few times this year. He is extremely agreeable to work with and it doesn’t take too long for the synergy to kick in when we get down to the task at hand.

As part of this assignment, I had the pleasure of digging a little deeper into Alex’s training and professional experience. He received a Bachelor’s and Master’s Degree in Anthropology from the University of Montreal in the 1990s before undergoing PhD training at Indiana University’s Department of Folklore and Ethnomusicology. Alex taught and lectured in a variety of institutions of higher learning in both Canada and the United States. Among these were the University of New Brunswick, the Université de Montréal and Tufts University in the United States. He was also an on-line instructor between 2008 and 2011, teaching introductory sociology to registered nurses in Texas..

When thinking about some of the things that characterize Alex, I inevitably think about his mobility. Alex currently resides in Ottawa and travels to Montreal on a weekly basis, whether to work from his office at Bois-de-Boulogne, or, more frequently ‘in the field’ with his peers in the English network. Needless to say, he has racked up quite a few Via Preference points from his train trips (though he occasionally takes a bus). Reading his CV is like leafing through a passport: Lausanne, Moncton, Boston and on and on! I had to stifle a chuckle recently when Alex humbly oversimplified his professional journey by saying that he had lived the “typical life of an academic.” 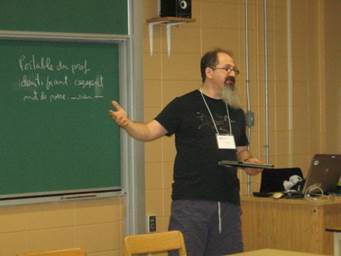 A Man on the Move: Alexandre Enkerli presents “Tracking Physical Activity and Learning” at the Rencontre des REPTIC meeting at the Cégep de Sainte-Foy during the fall semester of 2015. (Photo: Réseau des répondantes et répondants TIC)

His return to Montreal was probably inevitable, because he has fairly deep roots here (and he frequently mentions the Rosemont-Petite Patrie area fondly). In his younger days, Alex attended the Cégep de Saint-Laurent and still speaks positively of his experience and the strength of the music program which produced several active musicians who are now members of many house bands on various television shows. Alex continues to noodle on the saxophone (though I have yet to hear him play) and informs me that one of his favourite bands is the jazz and world music group Oregon. If you cross paths with Alex, ask him to tell you the story of connecting with other musicians while playing in the dark. You’ll witness first-hand his passion and enthusiasm for music.

The Art of Sharing

Alex loves to teach, and is very concerned about the act of learning with his students. Alex does not seem so concerned about going against the grain of traditional institutions who obsess about bringing learners from point A to point B. He wants his students to learn, but not necessarily to become standardised products of the educational system. According to one of his blog posts:

My own personal branch of constructivism is concerned with all forms of learning, including potentially disruptive ‘learning experiences’ and all sorts of learning processes which cannot be controlled by teachers, instructors, administrators, or education specialists.

Whether he is teaching a group of students or leading a live session in a VTÉ lab, Alex is concerned with the “sphere of agency.” The voice of each individual is valuable. The ideas that they share are an important contribution to the learning of the groups he teaches.

But what kind of person is Alexandre Enkerli once the professional duties of the day are fulfilled? He is a person with a vast array of personal interests. Alex has what some might consider as an unhealthy obsession with the perfect cup of coffee. His do-it-yourself approach to roasting coffee beans was the basis of an article in the Montreal Gazette on the art of home-roasting coffee beans.

Alex is also one of the most humanistic people that I know. Perhaps this is no accident given his training in Anthropology. Alex has gone on record as stating that he is a feminist. One way he advances the cause is by actively recruiting women to participate in greater numbers in techno-pedagogical activities in order to promote the inclusiveness of women in technology. It shouldn’t be surprising to learn that he has conducted Participatory-Action Research with Communautique, a community organisation fighting technological exclusion. This organization seeks to promote the participation of citizens through information awareness and the mastery of information and communication technologies.

As mentioned earlier, Alex has a musical side that we are still discovering. He still plays saxophone, and I am hoping to see him in action someday with his Yamaha WX-11 MIDI wind controller, that he has somehow managed to hook up to his iPhone. Indeed, the crossroads of music and technology seems to be another aspect of his multitude of interests. He recently presented a workshop on creating music with the Raspberry Pi single-board computer at a recent Montreal User Group meeting. 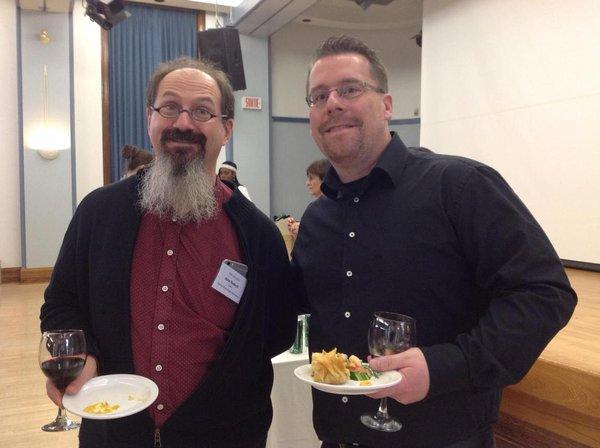 Alexandre Enkerli and the Author at the Dawson College Ped Day in 2015. (Photo: Dawson Peace Centre)

You would think that all of this activity would be enough for one person, yet somehow Alex also manages to be an administrator for the ADTE (Association pour le développement de la technologie en education) as well as to post on diverse online services. Alex has left what I would qualify as a significant digital footprint on the Internet, something he has taught in his university-level course on Cyberspace Sociology. Try Googling him and see for yourself!

I hope you will soon have the pleasure of meeting Alexandre Enkerli if you have not already done so. If you frequently attend Pedagogical Days hosted at your college or conferences on innovation in education, you are sure to bump into Alex. Why not take the opportunity to see how he and the VTÉ can partner up with you or provide some advice related to your innovative techno-pedagogical projects? He is a generous source of information and will surely have some ideas for you on interesting new ways to integrate technology into your classroom. In the meantime, you might want to check out some of his past publications on Profweb:

Alex has become a fixture of the college network in a very short time and a model for innovation. Thanks Alex!