The digital frontier affords many opportunities for approaching educational and institutional constraints with creative solutions. Roger Maclean at John Abbott College has started to address certain organizational challenges to teaching by using panoramic 360 degree videos to allow students to immerse themselves in a virtual environment for learning. I recently sat down with Roger, who assures me that the barriers to entry have never been fewer than now for teachers to try out 360 degree immersive video technology.

Q. Can you tell us how you got started using 360 degree panoramic video?

Roger Maclean (RM): A few years ago, I was speaking with someone working in theatre about conceiving a new set design. In the program, they use 3D modelling when designing the set. I had the idea that these 3D models could be imported into a virtual reality game development suite to allow the designers to walk through their set before construction actually started.

I had many other ideas that we could potentially implement in a virtual space, so we approached the Entente Canada-Québec for a grant to support the capital infrastructure investments to have the equipment we needed to make these ideas a reality.

One of the first trials we have created was designed for a colleague from the nursing department who came to me to speak about a logistical constraint. She wanted to demonstrate how to transfer a patient with reduced mobility to a toilet from a wheelchair, but there wasn’t enough physical space in the washroom to allow to show her large group of students to see the whole process. We began building a proof-of-concept that will allow students to watch the demonstration using their mobile devices and the inexpensive VR gear from Google (Google Cardboard). They can also use a computer or tablet to pan through the scene. I call these ‘digital pre-labs’ and have started to compile a digital library of these videos that will help students observe techniques before coming to class or a laboratory.

A proof-of concept 360 degree immersive video demonstrating proper technique for transferring a patient from a wheelchair to a toilet in a bathroom.

Q. What is the pedagogical potential for these videos?

RM: I have worked with nursing and am starting to work with the languages department on some ideas.

I think that these videos have great potential for procedural demonstrations in technical programs. I can also use the concept of reverse empathy in my pedagogical scenarios to put students in the shoes of the victim or the client so that they can experience an event from their perspective. Imagine being able to have a student be immersed in a virtual crime scene to search for evidence, or to have them experience being arrested from the perspective of the alleged perpetrator.

In the police technology and nursing examples, if there are mistakes in the intervention of the officer or the health-care professional, the immersive experience creates a discomfort that helps the student to learn the importance of doing things correctly. Class discussions about these issues can also be used to drive the learning home.

I am also interested in trying out live streaming in 360. Imagine live streaming your CEGEP class in 360 to meet with Aboriginal students from Northern Quebec to learn more about their culture, allowing them to participate virtually in discussions with the members of your class in real time.

Currently, I am trying to promote the the idea of producing videos that also show improper techniques to show the consequences of these errors to students. One example will be taking patient vitals incorrectly at multiple points of the procedure. The students will see the correct approach and the incorrect one from a first person perspective. These approaches are part of the digital-prelab, which has potential for biology, physics and chemistry courses as well.

I am also inspired by videos that I have seen that immerse you directly in refugee camps which have an incredible impact in terms of building empathy. Another idea would be for students to develop their own digital Ethnography, essentially allowing them to share their experiences with a whole class at one time.

Q. Can you tell us a bit about the steps required to produce the videos?

RM: The process of creating the videos is fairly straightforward, but there are a few logistical steps involved that take some organization. If we are doing a demonstration video, we usually need to storyboard and create a script for the teacher to follow. These preliminary steps are important for the quality of the videos. We then need to book an appointment and a location to film the video.

Since the camera takes two 180 degree videos at the time of filming, to create the 360 degree video, they need to be stitched together through a computer. Usually the cameras either have internal stitching, or have downloadable software and then you have to render the film through a software format for the web, which most colleges have. You can then host videos on YouTube or host them privately on the cloud for use in your courses. 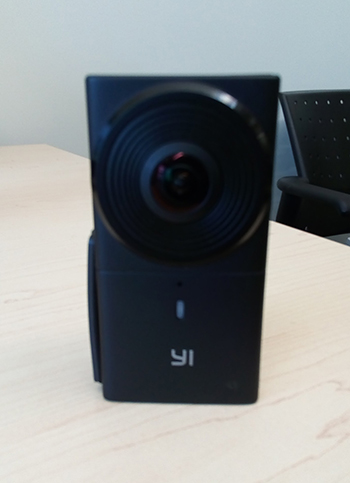 A picture of the 360 VR camera from Yi that is used by Roger Maclean to create videos.

Q. What hardware and software do you require?

RM: For our filming, we use a Yi VR camera that we put on a tripod in the environments that we would like to capture. Fortunately, in recent years, the price of this technology has come down considerably, and a good camera can be purchased for less than $350. We then transfer the video to a very robust PC that has a lot of processing power to stitch the video together with the software that is also provided by Yi.

Once the video is stitched together, we need to edit the video and render it for YouTube. We do this using the PowerDirector software from Cyberlink. In some of the videos we added a recap of the steps for a procedure (ex. Transfer of a patient to washroom) in the form of text. This was also done with the Cyberlink software.

Q. What are your future plans for working in virtual spaces?

RM: Our project team is interested in active experiences within the virtual space and mixed reality. We would like for students to be able to pick up and manipulate objects in their environment. We are also currently working on a virtual psychiatric ward patient avatar in the Unity platform that can interact with students by talking and using animated body movements based on A.I. This is being led by my colleague Usef Faghihi, a teacher from the Computer Science department. There are so many possibilities!

Thanks to Roger Maclean for sharing this innovative work-in-progress. We will keep the Profweb readership up to date on the next phase of Roger’s experimentation over the course of the 2019-2020 academic year! 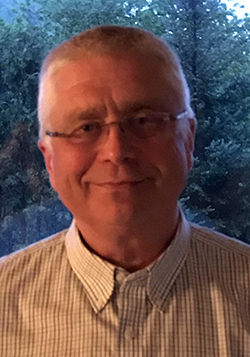 Dr. Roger MacLean teaches in the Department of Sociology at John Abbott College and has taught for over 2 decades at Concordia. He has also lectured at McGill. Roger holds a Ph.D is in Biosystems Engineering from McGill and an M.A. in Sociology from Concordia. Some of his professional highlights and accomplishments include being invited to present twice at INTERPOL and participating in the “Black Student Success Project” research project led by Dr. Myrna Lashely, where we examined how students in the Black community overcame prejudice, discrimination and racism, and a pilot project to understand how Police Officers manage accusations of racism. His current interests research interests lie in the pedagogical applications of immersive environments, mixed reality and Artificial Intelligence.