From Gamification to Transmedia Storytelling

On March 11, 2015, during a REFAD professional development workshop, Olivier Alfieri, a multimedia project manager at the CFORP, gave an insightful conference on how to help students learn to create “transmedia” storytelling in class.

Mr. Alfieri defined the term transmedia as “a narrative universe which comes in various types of complementary media”, such as:

In the transmedia approach, each medium contributes to learning and is selected according to its particular strengths. If a mobile phone is integrated into a learning activity, for example, one can take advantage of its immediacy and interactivity. The content created will be complementary, but also unique enough to stand on its own.

In a news report on the future Evil Queen’s search for a husband and on the fairy who gave her the Magic Mirror.

By posting blog entries as the Magic Mirror. He recounts his owner’s obsession with her beauty and rants about having to answer the same question over, and over again.

By creating a game in which the Prince must accomplish various missions that have him roaming around the forest.

Using the examples above, it becomes easy to understand how “each media contributes to the main story, but each story exists independently.”

There is a thin line separating these 2 pedagogical strategies. Each offers independent tasks that are part of a greater whole. The most noticeable difference, however, is that the student has an active role in the process of creating the learning activities in transmedia narration.

In gamification, students must undertake a quest. They have to solve problems and overcome challenges along the way. It is therefore the teacher’s responsibility to script the tasks (challenges) that students will complete and oversee their progression within the game.

Gamification borrows from game dynamics. In order to help teachers plan and script their learning activities in a gamified course, Gabrielle St-Germain and I have created the “Festiva” sheet. (The name of the tool is a tongue-in-cheek reference to a commercial that our colleagues who are above the age of 30 might remember). We catalogued 15 different game dynamics.

Some game dynamics and examples of applications were based on Festiva sheets from Anne-Marie Goyet, Gabrielle St-Germain and Thierry Chabot.

One of the personal contributions to gamification for which I am most proud is to have created a typology for the themes from which teachers can choose to gamify their courses. In the scripting process of a gamified teaching scenario, it is now possible to choose a theme from:

This last theme could allow the teacher to use an aspect of the history of science or literature to create their game, for example. But

The vast majority of the teachers we have trained at Collège Ste-Anne and elsewhere, however, tend to draw their inspiration from popular books or TV series, such as the Hunger Games, the Simpsons, Game of Thrones and the Amazing Race when designing their gamified teaching scenario.

An Example of Historical Role Play

While teaching history in secondary school, and before becoming an Education Advisor, I presented the students with a social media role-playing activity based on historical sources. “Les Messieurs de la Compagnie des fourrures” (The Gentleman from the Fur Company) were having a debate on the plans for colonization on behalf of Louis XIII. The instructions from Louis XIII were as follows:

It is the year 1640. Should I consider myself satisfied with the Compagnie des Cent-Associés? I shall read your advice on the Internets.

Using a minimum of 150 words, you shall present several aspects of the question. Your posts shall demonstrate the due deference that one must have for me, Louis XIII, King of France and of Navarra, Co-prince of Andorra and your King. 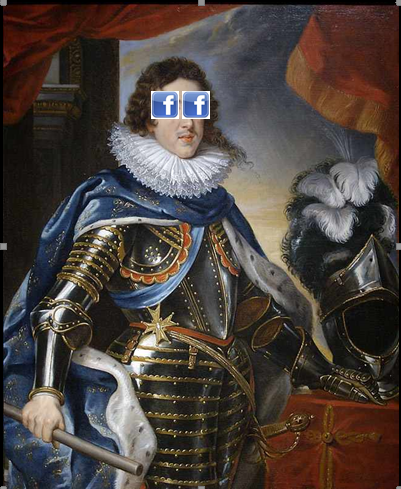 In transmedia storytelling, the student’s role is to explain or create a story while using a variety of media. For instance, it could be shedding light on a different perspective from a supporting character (as in the Snow White example). The teacher chooses the parameters for the writing and production. As Henry Jenkins points out in a retweet from Jacques Cool, transmedia storytelling is an opportunity to transcend the original story’s timeline in the past (with prequels) or to project into the future (with sequels or alternate endings).

French or other languages, history, geography, arts and even science classes can be well-suited to this pedagogical strategy.

The assigned readings in these subjects are also well-suited to activities that focus on the point of view of supporting characters, as with the Snow White example above.

Another example could be Baz Lurhmann’s Romeo+Juliet, a movie used by our Secondary 3 English teachers. After recording the video of a scene they had chosen in the movie, the students might have been asked to produce a podcast on SoundCloud in which the Capulet and Montague families deliver formal eulogies about the tragic events taking each of their respective audiences to task.

This discipline is also well-suited to transmedia storytelling, since the main competency of history is for the student to be able to explain history.

In transmedia storytelling, creating an explanatory essay similar to those posted on Wikipedia would be the wrong approach. Rather, students would have to use historical data to create a story which is historically plausible. This might be an opportunity to show the student’s work using less conventional media, such as comics, cartoons or podcasts.

Students might also travel back in time, fully embrace anachronisms and take part in a “silent debate” on social media as in the example described earlier.

Another idea could be to ask students to imagine a conversation between two individuals. Online tools such as Fake iPhone and FakePhoneText could be used to generate fake text messaging conversations.

An example of transmedia storytelling in Mélanie Tremblay’s history class, at Collège Sainte-Anne. A dialogue between The Great Minds of the Renaissance’s on Epad.

Activity: The Great Minds of the Renaissance

A few pieces of advice for an interesting and relevant dialogue

This could be a great occasion to reinvent lab reports… to be continued!