Home » Publications » Articles » Free as in Freedom: A Report on the Colloque Libre 2015 FOSS Symposium

Free as in Freedom: A Report on the Colloque Libre 2015 FOSS Symposium 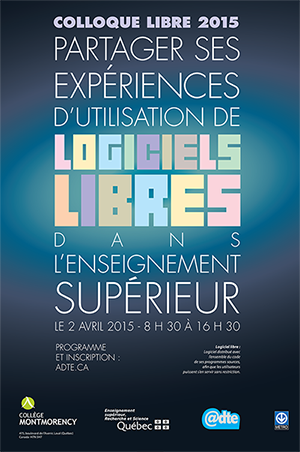 Sharing Our Experiences with Open Source Software in Higher Education

Education technologists, free software enthusiasts, higher education administrators and entrepreneurs descended upon the Collège Montmorency on April 2nd, 2015 for the Free and Open Source Software (FOSS) Symposium organized by the Association pour le développement technologique en education (ADTE). What follows is an attempt to capture the essence of what amounted to a three-day conference stuffed into a single action-packed day!

If the Colloque libre 2015 was a bid to convince and convert more members of the college network to try or adopt FOSS solutions, they were preaching to the choir. I have fond memories of installing Slackware Linux for the first time, diskette after diskette in the final weeks of 1997 on my Raven 486-SX laptop. The elation I felt when I rebooted that machine into Linux for the first time is not something that I can easily relate to others. In fact, I have put many people to sleep with this story over the years, to the point where I had almost lost hope of finding a kindred spirit.

As I saw it, the symposium’s theme, Partager ses experiences d’utilisation de logiciels libres dans l’enseignement supérieur (Sharing Our Experiences with Open Source Software in Higher Education) was both a rallying cry and an opportunity to finally meet with other people who get as cranked up as I do about the FOSS movement. Many of the Ministry’s IT Partners were there: Cégep à distance, the CDC, DecClic, Profweb, la Vitrine Technologie-Éducation, the IT Representatives Network (REPTICs) as well as several actual IT-REPs and REPTICs from the four corners of the province.

After receiving our delegate packages, and being formally welcomed in an opening address by Franche Lamarche, Academic Dean, and Hervé Pilon, Director General of Collège Montmorency, the day started unfolding at a frenetic pace. The conference was run with military-like efficiency. Each roundtable discussion and workshop was thirty minutes long, to allow for the maximum amount of exploration. The organizers also made sure that there was ample time to network with attendees, or to check out the exhibitor kiosks on the generous breaks between activities. There was even a visit to an inflatable planetarium in the Agora of the CEGEP, which had a projection of the celestial bodies using the Stellarium software package.

Anne Gaelle Habib, from Cégep Ahuntsic presented some interesting results from a survey on the use of FOSS in Higher Education conducted by the ADTE. Thirty-four CEGEPs and four universities participated. Some of the more common FOSS software installed at the respondent’s institutions were: VLC Media Player, 7zip (archiving), PDFCreator, as well as application servers such as Moodle (learning management) and WordPress (blogging). At least 30% of the survey respondents also reported using Audacity (audio editing), BigBlueButton (virtual classroom), the GIMP (graphic editing), Camstudio (screencasts), LibreOffice (office productivity suite), Zotero (research reference management tools) and Koha (integrated library system). Seventy-four percent stated that they are open to using FOSS, and as many as 90 percent of respondents are willing to replace at least some of the proprietary software solutions with FOSS solutions. They feel that this would reduce licencing costs for the CEGEP and make software more accessible to the students.

Following Anne Gaelle’s presentation, a roundtable discussion on the use of FOSS in higher education was held. Both the CEGEPs and the colleges were represented. Each presenter had six minutes to discuss the evolution and current situation of the integration of FOSS, be it from the perspective of public institutions, or from the private firms that are partnering with the colleges and universities. Time and time again, the presenters pointed out that whether or not we are aware of it, we are all benefitting from FOSS, from the server applications that are backbone of the Internet, to the software that is running on our smart phones. 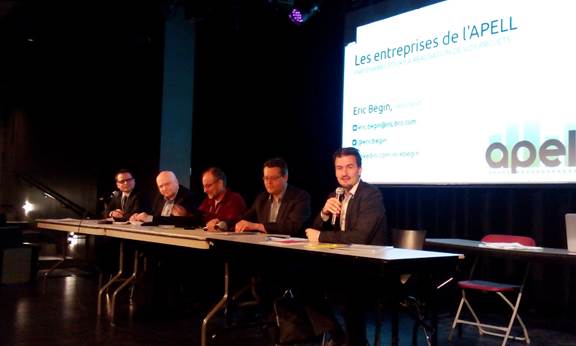 A cornucopia of choice

Then the symposium attendees moved into the sessions of their choosing. For the first session, I really have to hand it to Alexandre Robin, a graphic designer from the company Jaunorange, who presented the FOSS graphic design trio The GIMP, Inkscape and Scribus with a quick demonstration of each. All this and he still managed to field a few questions for good measure - in under thirty minutes! Alexandre has been using these solutions for years, and even the least stable of these packages has evolved to be market ready and solid enough for his professional use as a graphic designer.

The second session I attended was a presentation of the ProjectLibre project management tool. Isabel Sauvé and Michel Bélanger, two Teachers from the Civil Engineering Technology department at Montmorency, recounted their history with ProjectLibre. A few years ago, it was announced that the college would not be renewing their Microsoft Project licences. Initially they had a fair amount of difficulty with migrating to ProjectLibre, but noted that it has become much more stable since. Despite some annoyances, they feel that the software has all the functionality that their students need. The attendees of the workshop were then treated to a quick demonstration of the software with a shed constuction project.

In the third session, we had a special treat. A two-for-one, if you will. Freeplane, a concept-mapping software, was demonstrated through the BigBlueButton virtual classroom platform by Lucas Gruez, Éducation nationale (France). Lucas expertly presented the software in less than thirty minutes, without the slightest technological hiccup coming from the virtual classroom software.

In my fourth and final session, the sky was no limit, literally and figuratively, as Karine Aeschlimann, a Teacher from the Physics-Geology department at Montmorency treated us to a presentation of the Stellarium planetarium software. We travelled to the end of the galaxy and back with a few mouse clicks and noted that Stellarium also contains folkloric information about the constellations from many different world cultures. 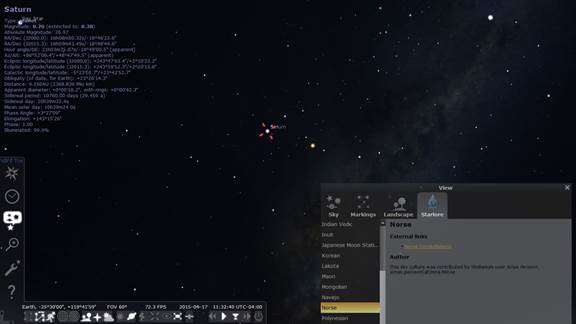 In all, there were seventeen presentations. Needless to say that I can’t resume all of them within this article. But I would suspect that each attendee was able to find a selection of workshops and discussions to satisfy their curiousity and professional needs.

The afternoon roundtable, skillfully moderated by Jean Allard from the Collège Jean-de-Brébeuf, revolved around FOSS project presentations. Mario Côté from the Cégep de Rimouski presented the results of a survey on the college-wide use of LibreOffice at Rimouski, which received mixed reviews, largely due to functionality and compatibility issues. Anthony Laquerre of the Centre Collégial de Services Regroupés (CCSR)enlightened the attendees on the use of the Koha integrated library system, and the contribution that the CCSR is making by sharing its innovations with the open source community. Raymond Cantin, from Savoir-Faire Linux presented a series of CCDMD projects that used open source solutions such as Drupal, Plone and MediaWiki. To round out the presentation, Simon Légaré from the open source solution company Libéo shared his thoughts and sage advice on safeguards that institutions must put in place when they are deploying solutions on the web.

Looking forward and looking back

The whole symposium was great, but the highlight for me had to be the opportunity to ask questions in my second language to Richard Stallman, the founder of the Free Software Foundation and spiritual leader of the FOSS movement, who also responded to us in French. After viewing his insightful and sobering TED Talk from TEDx Geneva, we connected with Mr. Stallman, who was travelling in Asia, by teleconference. After fielding some tough questions about cloud computing, data privacy and the rising use of tablets with proprietary software, he reminded the crowd that freedom comes with a price. If you want to be truly free, you need to make sacrifices to comfort and convenience. Although there was much talk of FOSS as a means of saving money in the context of governmental belt-tightening, both the conference organizers and Mr. Stallman dismissed this as a secondary consideration. The true gain, in his eyes is the freedom to do what we choose with the software, to be able to scrutinize or edit the code (if we need to) and to ensure that these tools are doing what they need to do, and only what they need to do (rather than gathering data on the unwitting users). 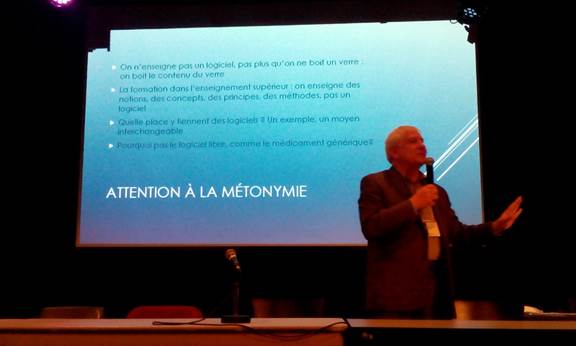 Congratulations are definitely in order for the ADTE’s President, Pierre Cohen-Bacrie and his organizing committee for an excellent event that was professionally managed from the reception to the closing plenary. The ADTE is already alluding to the possibility of another symposium in-2016, either in Montreal or Quebec City. One thing is certain, the bar has been set very high for the symposium organizers for next year!