Classcraft is a Quest-based system that promotes student engagement and positive behaviours by gamifying the classroom. The Quebec-based company has been moving from strength to strength and garnering awards since Profweb first reported on their platform in 2015. In January 2019 I travelled to Sherbrooke to interview Classcraft co-founder and CEO Shawn Young in order to learn more about a number of new features added to the Classcraft ecosystem in 2018, like their EMS analytics, the Quests Marketplace and a recent mobile app update. 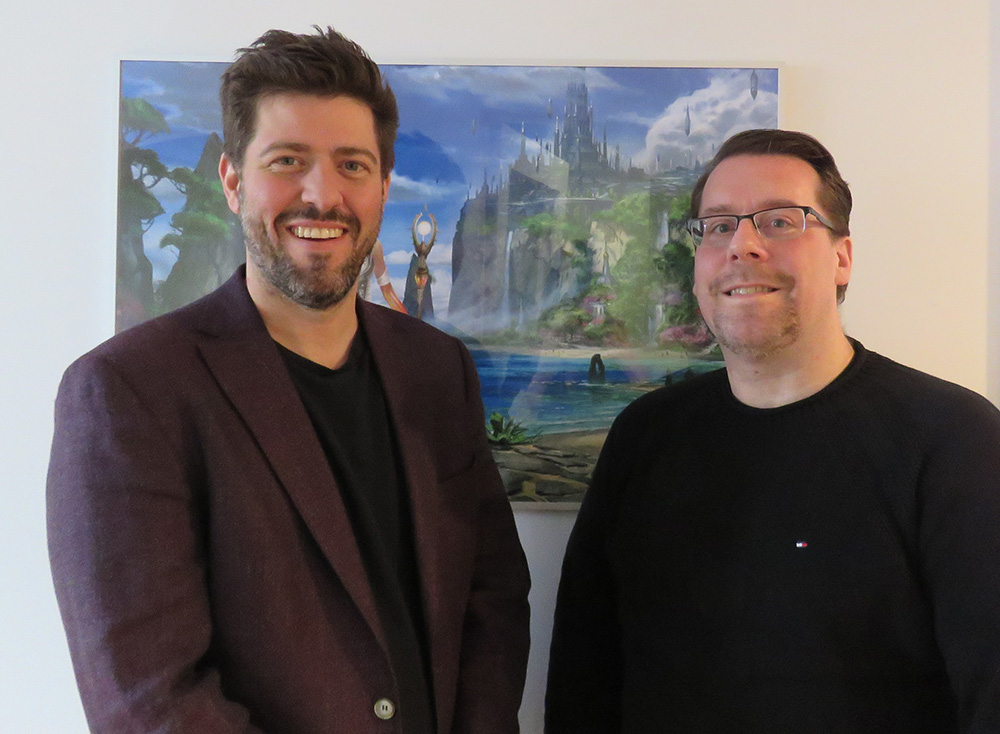 Classcraft co-founder and CEO Shawn Young (left) with the author.

Q. Can you talk a little bit about the uptake of Classcraft?

SY: Classcraft has been growing really fast. We have around 5 million users in 165 countries. Many of those are in the elementary and secondary school system. A lot of our focus is on expanding in the US, since it is a larger market. In Quebec there has been a fair amount of growth, largely based on word-of-mouth. We are working on an innovation program with Pedagogical Counsellors from the FEEP (Fédération des établissements d’enseignement privés) and we are starting to work with more CEGEPs.

You may have heard that the Cégep de Drummondville has started using Classcraft for one of their Continuing Education programs [article in French]. 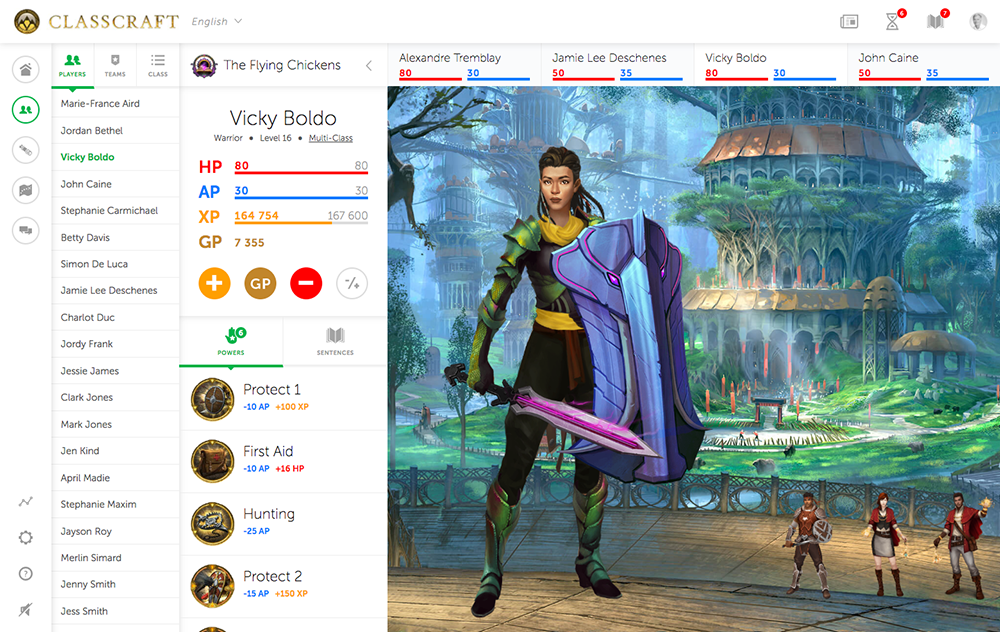 One of the many colourful avatars in Classcraft. (Courtesy: Classcraft)

Q. Classcraft has placed a great deal of emphasis on supporting SEL (Social Emotional Learning). Can you tell us why this is important in the current educational paradigm?

SY: Social emotional learning is about students managing their internal emotions but also learning how to interact with others on an emotional level. In a broader scope, SEL can be tied to teaching the whole child - teaching life habits.

The challenge of teaching the SEL skills is that they are not directly related to curriculum, but they are very important. SEL data can help educational stakeholders understand and manage emotional interactions between learners.

In Quebec, monitoring school climate will be important as schools become more crowded in the next few years, and we continue to integrate students that have recently arrived from other countries.

I had the honour of being selected as a Scientific Advisor to UNESCO and was invited to India in November of 2019 to participate in a discussion group on SEL, digital pedagogies and games. The objective of this meeting was to propose guidelines for SEL development for the United Nations and included full-day meetings of Ministers of Education from around the world, researchers, and large companies engaged in social/emotional development. In the context of more and more bullying and violence in schools, SEL has become very important. We are going to see SEL trickle down as a means of solving educational crises.

Q. Can you speak about some of the research that has been completed on the impact of Classcraft with regards to SEL?

SY: There is a ton of research that points to multiple benefits, like student well-being, motivation, engagement and outcomes. There is the RULER approach being developed by Yale University’s Center for Emotional Intelligence. There is also the CASEL organization that has a theoretical framework.

It is estimated that every dollar invested in SEL saves $11 in intervention costs. It can help reduce suspension and dropout rates. Investing in SEL can also contribute to the improvement of school climate by reducing bullying and improving safety. In the State of Illinois, there is legislation that requires schools to assess 3 socio-emotional indicators each year on top of the usual academic performance.

We have published some of the research highlights on our website. One of the things I would point to is a study of Classcraft in regards to the CASEL theoretical framework. There is also a Positive Behaviour Interventions and Supports (PBIS) handbook that speaks to how to gamify behaviour with Classcraft.

Q. According to a recent press update, “Classcraft's proprietary Engagement Management System (EMS) gives school leaders new insights into students’ progress and well-being by measuring academics, engagement, social emotional development, and school climate in real time.” How have educators started to use it?

SY: To understand this development, we need to rewind to 2015, when we created Classcraft to drive engagement at the classroom level by gamifying behaviour and interventions for classroom management. The learning is personalized through Quests.

We saw that schools and districts wanted to be able to gain insights into which behaviours are being enforced within their system.

As an example, the State of California has included school climate as a performance indicator that is tied to school funding; they’re not just looking at academics. We decided to create a school climate index based on teacher interventions that were either positive or negative, as well as engagement rates and absenteeism.

Traditionally, when you think about behavioural data (like referrals and suspensions), schools only track information on negative things, but Classcraft shows what is happening with the 90% of kids who are behaving in a positive way. 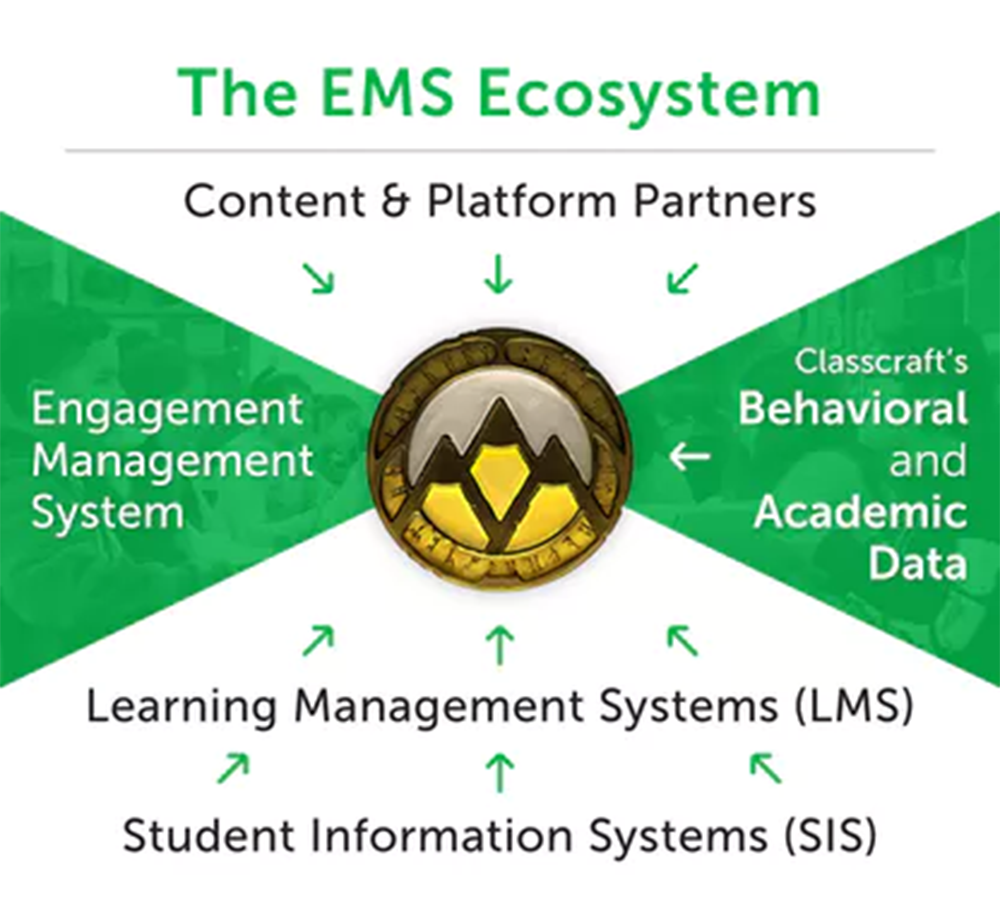 The Engagement Management System Ecosystem with Classcraft as a central piece. (Courtesy: Classcraft)

Administrators have access to presets and rubrics they can use around the entire school to provide teachers with a framework to work on strategic elements. For example, they may want students to be able to name, navigate and negotiate emotions, and give students points for using this technique in their relations with other students. How are they going to do that? This is where Classcraft comes in. We can encourage specific behaviours that help them successfully manage an emotional crisis.

What is interesting, since it is engagement driven, is that the kids are driving the implementation in the schools rather than the teacher and administrators trying to implement in a top-down approach. 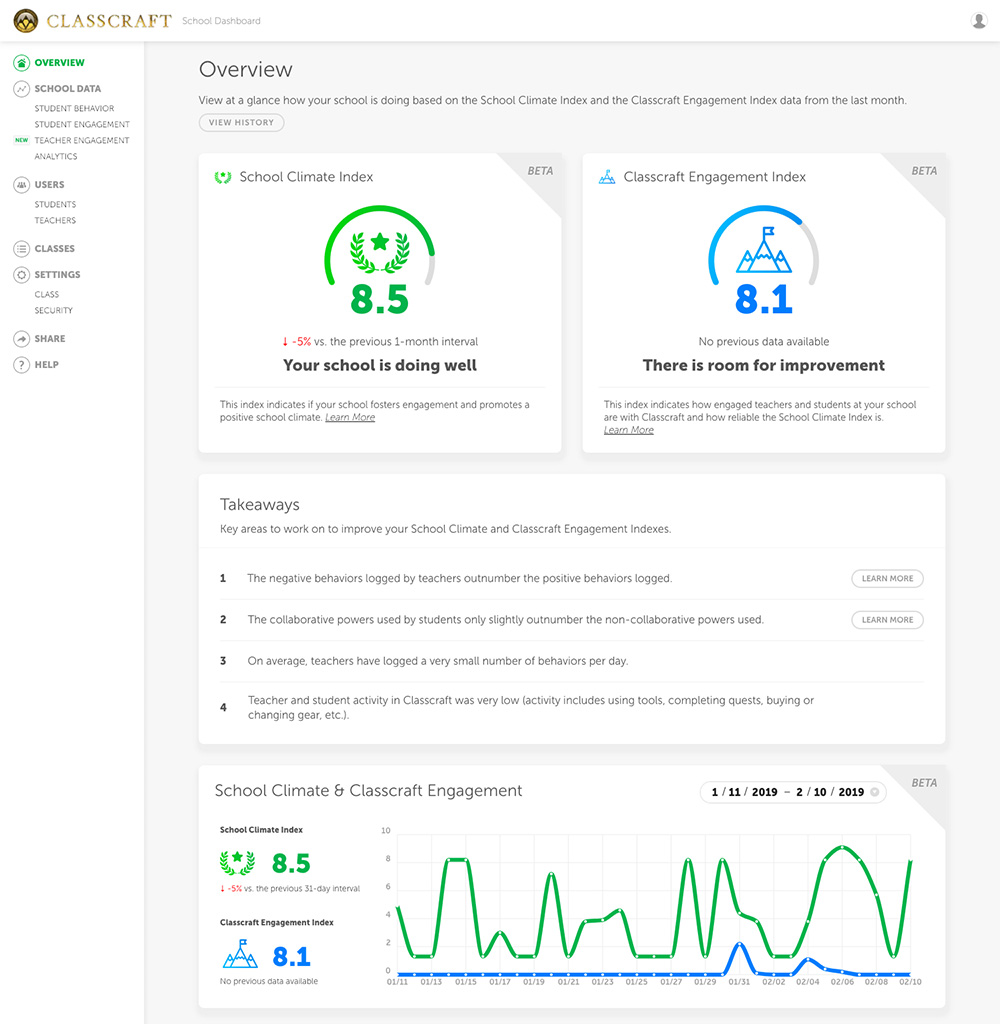 Q. Since not all administrators have experience working with analytics, does Classcraft have an approach or initiative to facilitate adoption of these tools?

SY: We have a really robust professional development team that includes a teacher, a principal, and we have an experimental project-based school.

The interface is very clean and easy to use and will add advanced reporting features in the future.

We currently use dashboards, graphs and leaderboards. One of the key performance indicators is the School Climate Indicator (SCI) which is a score from 1 to 10. It is calculated every day and aggregated over the month. This indicator will be high when student engagement levels and collaboration are high. Schools with lower scores often have a lot of punitive actions for negative behaviour that has been exhibited by students. If the SCI is down two points from the previous month, administrators can investigate to identify what may have changed.

There is also the Classcraft Engagement Index which is calculated based on how often kids are logging in and using different parts of the platform, as well as how often teachers are attributing points for behavior. When this indicator is high, we feel that we can trust the other data and trends that we identify.

The data can be compared across boards or districts. It’s pretty powerful to keep tabs on what is going on. 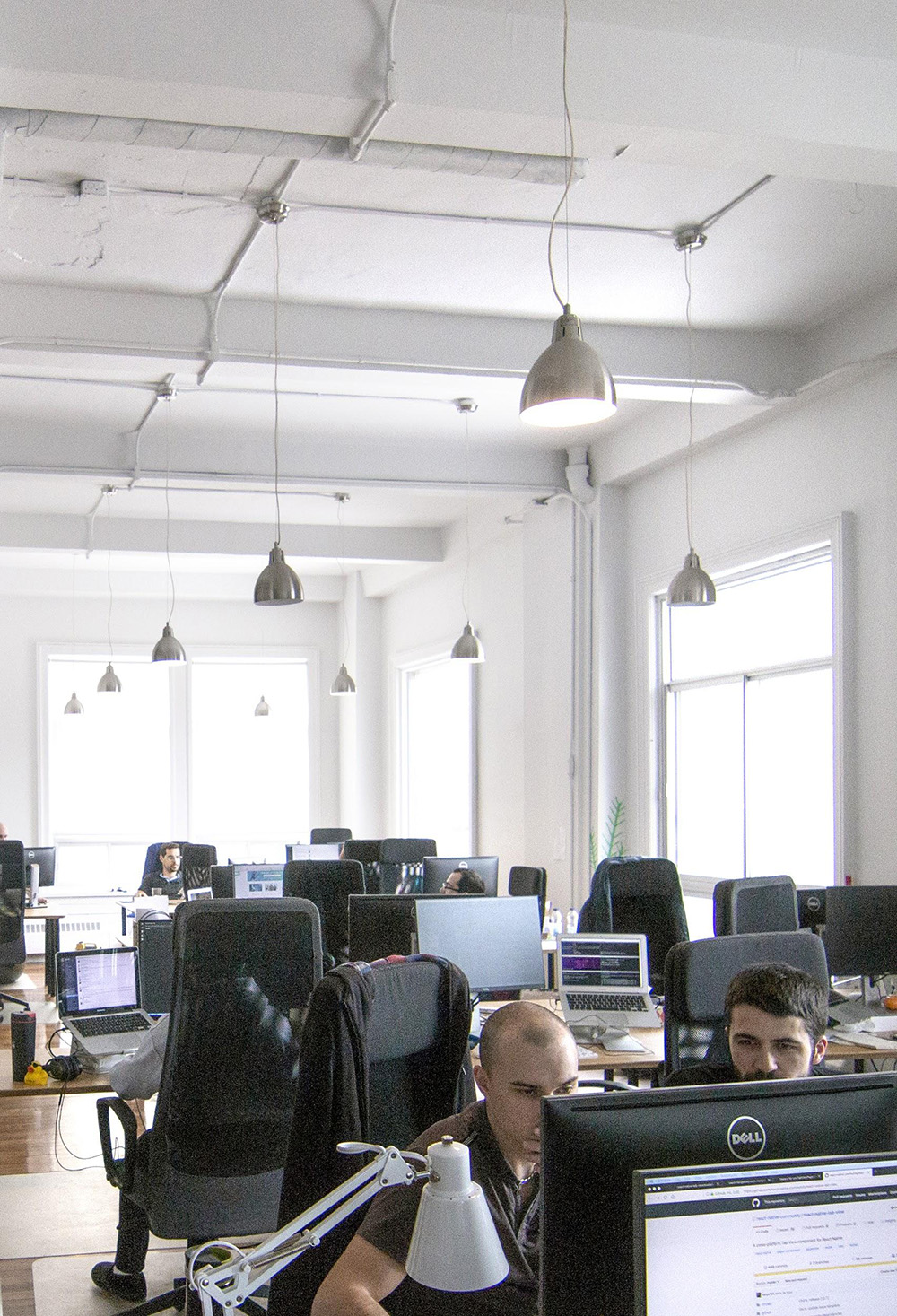 The loft space where Classcraft is developed. Classcraft also has offices in Montreal and New York City. (Courtesy: Classcraft)

Q. What is the Quests Marketplace?

SY: The Quests Marketplace was launched in June 2018. There are about 500 quests that have been created by teachers that can be downloaded for free.

SY: Our mobile app is in continuous development, but we prioritize the browser experience first since it is what schools are using the most. There is even a Chrome extension that can grant XP (experience points) from any website. The use of the app varies from one school to another and varies based on the technology-readiness of each school.

The Classcraft mobile app was rebuilt from ground up in the last 12 months and the Quest mechanics were integrated into the app.

Q. You mention on your web site that you integrate with a variety of platforms. Can you speak about how Classcraft integrates with Google Education and Microsoft Platforms?

SY: Our vision is to drive engagement across the entire educational experience whether it be in a bricks and mortar environment or within learning platforms.

Classcraft integrates with multiple platforms. We are a Premier Google Education Partner, and you can pull assignments directly from the Google suite and put them into Quest maps. We also have OneDrive integration.

We also integrate with the LRNG microcredentialling platform which is used by many high schools, gaining badges in LRNG gives you points in Classcraft.

We have partnered with Clever to integrate more easily with information systems from school districts. There are dozens of different student management systems across the United States and the partnership with Clever facilitates the integration across the board.

Q. What type of features would you like to see in Classcraft in the next couple of years?

SY: There is a real opportunity for us to dig deeper into the analytics piece. Our roadmap will focus on refining and creating more robust analytics and continuous improvement of our integration to external systems.

On the gaming side, we will be adding more functionality to Quests to bolster student engagement even more. There are narrative features coming, and we want to provide more opportunities for metacognition and introspection.

: Shawn Young (centre) in a team meeting at the Sherbrooke headquarters. (Courtesy: Classcraft)

Q. Any further plans for internationalization?

SY: We’re working with different partners to promote Classcraft and are receiving support from our government for exporting.

Classcraft is now available in 11 languages and we are in 165 countries. The international expansion has happened organically since we haven’t actively marketed outside of North America. We do have an initiative in Spain, where Classcraft adoption has been very strong among teachers.

What’s great about our international development is that we can take some learning and best practices in our work with educators around the world and bring it back to Quebec to enhance our own ecosystem here!

I would like to thank Shawn Young for generously accepting my interview request and taking time out of his hectic workday to share some of the exciting new features of Classcraft. It was a real pleasure to receive his insight on SEL and learn about how Classcraft is motivating students in 165 countries! All the best to Shawn and his team for continued expansion of Classcraft both in Quebec and internationally.