Home » Publications » Articles » Discover the Pedagogical Potential of Raspberry Pi: It Will Leave You Wanting More!

Discover the Pedagogical Potential of Raspberry Pi: It Will Leave You Wanting More!

The Réseau des répondantes et répondants TIC held a meeting from October 12 to 14, 2016 at O’Sullivan College in Quebec City. On the agenda, there were several training and networking activities for the IT Reps and their partners in the college network. We had the opportunity to attend the presentation given by Christophe Reverd, techno-pedagogical counsellor for the Vitrine technologie-éducation (VTÉ). We offer you a summary of the activity “Raspberry Pi in class: What is it? Who is it for? What will it allow the user to do?”. We can say it straightaway, Christophe knew how to capture the attention of the participants.

Raspberry Pi, What Is It?

It is a micro-computer the size of a credit card. The original project was launched in 2009 by the Raspberry Pi Foundation in collaboration with the University of Cambridge. The main objectives were:

A first version was proposed in 2012 at a cost of $25 (USD), an unbelievable price for acquiring a microcomputer for home or school use! As for the computer code, it can be programmed using languages such as Scratch, Python or even now, C, according to Christophe.

As for its uses, the possibilities are almost endless, because we can add visual, auditive, and temperature sensors, etc., depending on the desires and objectives of each user. Even though Raspberry Pi was more limited with respect to its performance at the time, the idea of launching an open-source model, based on Linux and at a small cost, is a real success! Christophe reminds us that this system is not totally “open”, because the chip at the heart of Raspberry Pi is not accessible to the public, but all of the other components of its hardware are. 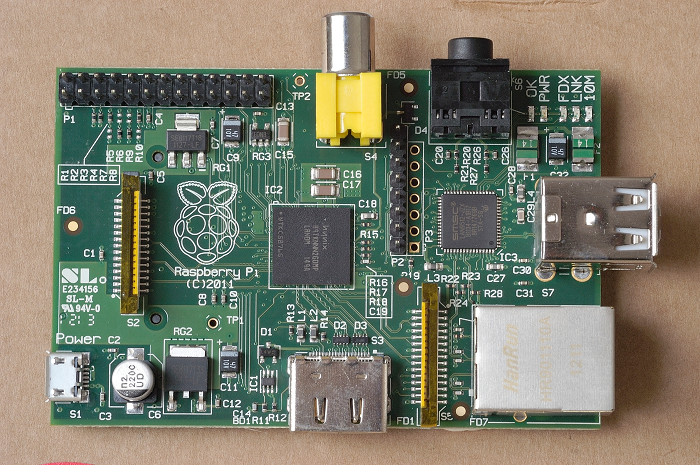 A video being worth a thousand words, here is a very complete, yet succinct, clip that summarizes very well the wonderful and accessible world that we can reach with Raspberry Pi:

What Is It Used for?

A Raspberry Pi is equivalent to a microprocessor with an impressive capacity to process for its size and price. We can better understand its usefulness and its potential, when it is connected to other electronic systems or computers capable of carrying out particular tasks with the objective of obtaining new and very interesting tools. This is the case, for example, if you connect a Raspberry Pi microcomputer to Arduino. Arduino is a microcontroller that allows the user to carry out precise tasks of reading data or creating programming projects, such as home automation or robotics, very easily with the help of the software Scratch. Christophe has, incidentally, facilitated a laboratory on the subject and has written an article on the theme of educational robotics on the Profweb site.

Another example of an interesting association, already dealt with by the VTÉ, refers to the famous Fab Labs (digital creation workshops). They are open platforms of creation and prototypes of physical objects, “intelligent” or not, that allow for the conception of almost any 3-dimensional object requested by the user.

You have to see the Raspberry Pi as the “brain” of the object and the other connected elements as the “muscles” allowing it to realise the desired task.

The latest version, the Raspberry Pi 3, is the most complete and powerful to date. In addition to using the same entry ports as in the previous versions, it has 2 extra elements: WiFi and Bluetooth, that are directly integrated into the unit. We can therefore have better connectivity to the surrounding environment. As Christophe stated: “An element not to be neglected in our interconnected society!” 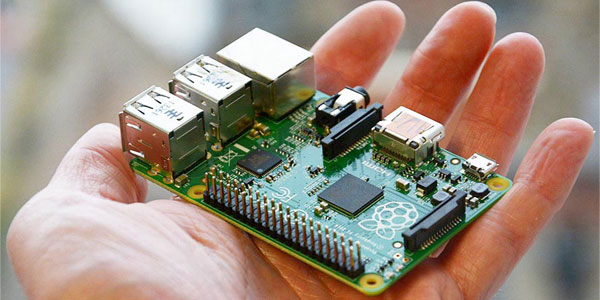 To begin, there exists the Raspberry Pi Zero, a miniature version that costs only $5 and is designed to a greater extent for the creation small mobile devices. 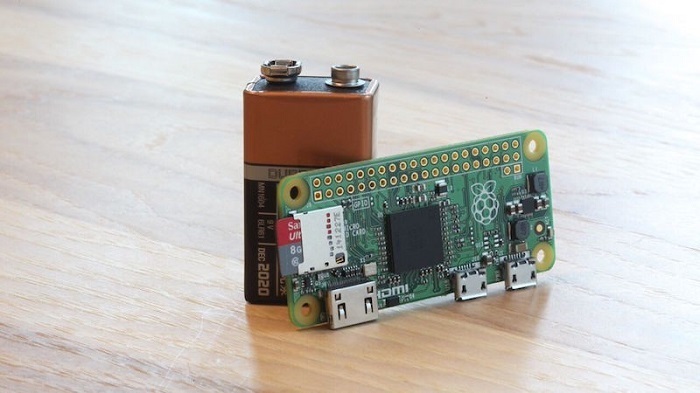 Currently, there exist numerous examples of simple applications with a Raspberry Pi system. Christophe showed us a very nice one during his presentation: a small robot that is capable of moving on its own, thanks to its 2 wheels and different visual captors placed in the front and on top of its structure. All of this is possible, with the installation of the Raspberry Pi Zero and a module that allows the user to control the motors of the robot. It can even be controlled from a distance! If you would like to try creating your first robot, here are the instructions (including the unit made of plastic from a 3D computer). 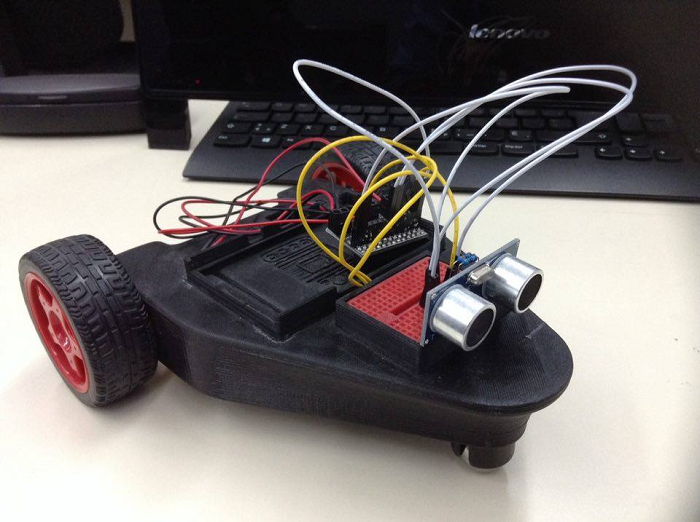 The robot presented by Christophe Reverd during the Meeting of REPTIC 2016.

Numerous projects, some more crazy than others, have already been realized throughout the world (links to French only sites): 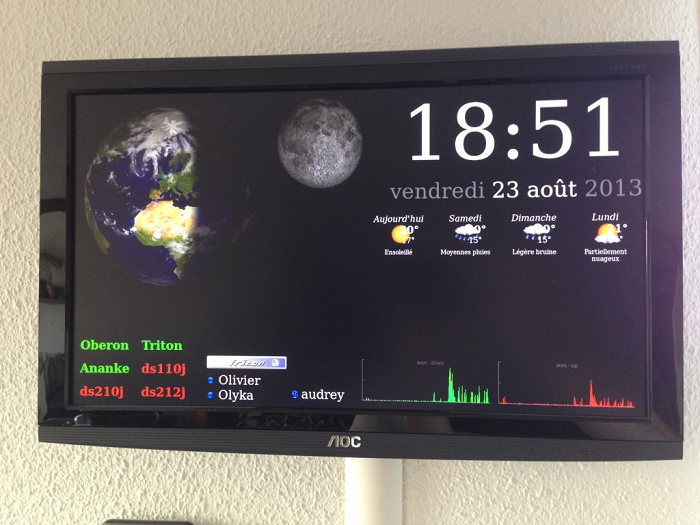 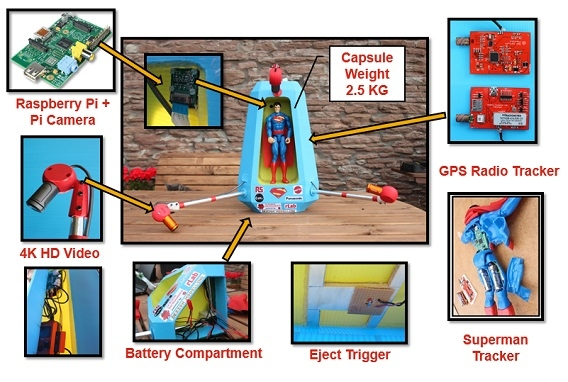 How Can It Be Used in Schools?

The use of a Raspberry Pi allows for direct manipulation of electronics and also to better understand how the objects students use every day function. In the United-Kingdom it is a real phenomenon: the Raspberry Pi is used in a large number of primary and secondary schools in an entertaining way. For teaching purposes, it can serve to:

In the province of Quebec, its use is rather limited and it is often used for integration projects at the end of secondary school. Fascinating fact: more and more youth express their desire to add an electronics field to their integration project. Christophe explained that the college network discovers it through Fab Labs, makerspaces and other robotics clubs. Incidentally, CEGEPS and universities (French content only) in Quebec are slowly starting to explore this new world and the first projects are starting to emerge. For teachers, using Raspberry Pi breaks up the silos and brings collaboration between departments in order to elaborate interdisciplinary projects.

If you wish to acquire a first complete kit, it is easy to find in all good electronics stores and on certain websites. In addition to the Raspberry Pi, you must add a power pack and a micro-USB cable, as well as a microSD card. For less than $70, you will be in possession of a totally functional microprocessor! Because it is an open source system (99%) and all of the required software for it to work are free or furnished without fees (ex: Minecraft or Mathematica), why deprive yourself of such amusing and accessible pedagogical potential, that allows even the most “technophobic” of us to discover this fascinating world?

How to Get Started Once You have a Kit in Hand?

Numerous resources, both virtual and human, exist to help and guide you in correctly using your first Raspberry Pi. With years of development, a community has been created around Raspberry Pi, making it easy to help one another with technical problems.

For example, the Club Framboise, which is a Quebec-born club created by Christophe, brings together users of Raspberry Pi in the province of Quebec and enables the sharing of knowledge and projects that use the microcomputer. This way, you are never really alone should you face any problems. All of activities of the Club Framboise (Quebec, Montreal, Yaoundé) are public. They are announced directly on ClubFramboise.ca and the social media platforms of the Club:

Christophe told us that there is also a specialised magazine for the various uses of Raspberry Pi, the MagPi, which is free! Even better, a special Educator’s Edition was recently published to promote the simplicity and accessibility of this type of device to use in class for interdisciplinary projects.

Do any of you know about or already use Raspberry Pi for education?

Do you have ideas for educative projects that you would like to realise with this type of microcomputer? Or, do you already have a project in process? If you do, share your experience. We look forward to reading more!