Home » Publications » Articles » Develop a Project with the CCDMD? Nursing and Physics Teachers Tell Their Stories

Develop a Project with the CCDMD? Nursing and Physics Teachers Tell Their Stories

Since 1993, the Collegial Centre for Educational Materials Development (CCDMD) has accompanied college network teachers wishing to develop educational material projects (print-based or computer-based productions that are useful for teaching and learning). Each year, the CCDMD invites teachers to submit their projects.

To give you an idea of what developing a project with CCDMD entails, we are presenting 2 cases of teachers who have been through the process. It’s also an opportunity for our readership to learn more about 2 very interesting pieces of educational material!

At the beginning of her career as a nurse in the 1980s, Suzanne Larochelle, a Francophone, toiled to assimilate the vocabulary in the Anglophone hospital where she worked. For a long time, she had her dictionary in tow with her, but still found herself getting frustrated on a regular basis. Effectively, the vocabulary in the field of nursing is very rich in specialized terminology that you won’t find in an average dictionary. What’s worse, each hospital (or almost) has its own “dialect” in which terms can change from one hospital to another or from one region to another.

Later, when she began teaching at Heritage College in Gatineau, she witnessed her students confronted with the same situation, but in reverse. The students at this Anglophone college were being placed more and more frequently in French environments for their internships. Suzanne felt for them, and wanted to help them so that they might avoid having to go through what she had. It was then that she decided to create a bilingual lexicon.

For 2 years, she worked on her lexicon and had developed a substantial amount of material. Then, in 2009, one of her colleagues encouraged her to submit the project to the CCDMD, so that she might have the support she needed to have her book professionally edited. At the time, Suzanne’s work had been gaining recognition from her colleagues, both locally and at other English CEGEPs in Quebec, who were quite enthusiastic about her project. With letters of support in hand, and a very convincing sample of her work to present to the project adjudication committee, Suzanne didn’t have a very hard time getting her project accepted.

How would she sum up the work in one word? “Long!” says Suzanne. For close to 5 years, Suzanne watched her book take form, step by step. Difficult, for someone who is so busy to have to cultivate her patience before seeing the fruit of her efforts committed to paper!  However, Suzanne is full of praise for Nicholas Birks, the CCDMD project coordinator that accompanied her on the project. He provided lots of support, was both patient and reassuring and would always “tell it like it is.” He conducted excellent research, found the right contacts for the copy editing and verification of the translations. Suzanne admits from the outset that Nicholas’ editing work allowed her book to attain a standard for excellence that she would not have been able to manage had she done the project alone.

Finally, in October 2014, the Nursing Lexicon : English-French was launched!

Suzanne found her experience very enriching. It was difficult for her to find some room in her already packed Nurse/Teacher/Masters student schedule. Nevertheless, she doesn’t hesitate even for one second to say that it was all worth it. She particularly appreciated the continual support that the CCDMD provided to her. She liked the feeling that she was being taken care of, while also knowing that her project was in good hands.

Today, Suzanne still derives a great deal of satisfaction when she picks up her book and leafs through it, admiring its professional treatment. What’s more, she knows that it has been useful for hundreds of students across Québec! 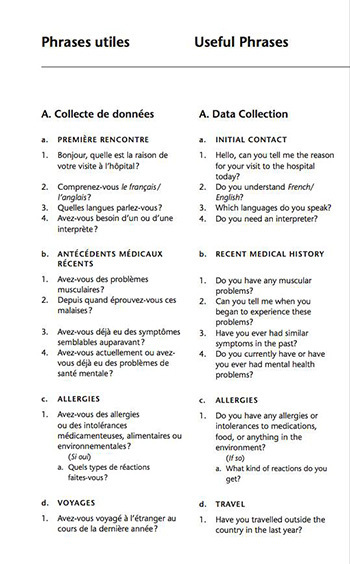 A sample of a page from the Lexicon

A Physics Website of Life-like Activities for College Students – A Project Augmented by Olivier Tardif-Paradis, Mathieu Riopel and Alexandre April

The Problem-Based Learning for College Physics website was born in 2008. The site was an initiative of Nathaniel Lasry from John Abbott College, who had submitted his project to the CCDMD. The goal of the site is to offer free high-quality learning activities for college-level Physics teachers using Problem-Based Learning (PBL).  Teachers wanting to use this approach but that don’t have the time to create contextually-rich problems can refer to this site. Each activity includes a Student Guide and a Teacher guide. 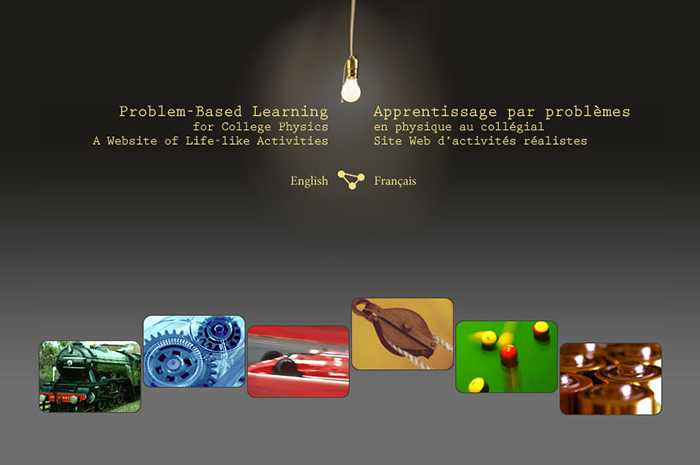 The site invites teachers to submit their own suggestions for activities. Even if the site is very successful (with thousands of downloads from around the world), very few activities were submitted prior to 2014. One of these submissions came from Olivier Tardif-Paradis, who teaches Physics at Cégep Garneau.

Following a presentation from the CCDMD team at his college, Olivier got an idea to submit a project to update the College Physics PBL site. He convinced one of his colleagues, a teacher named Mathieu Riopel to join him on this adventure. Together they received the financial support from their college and letters of support from teachers from other colleges (including Nathaniel Lasry). They subsequently presented their project to the CCDMD. The teachers did not have the resources to update the entire structure of the website, but CCDMD offered enough financial support to Olivier and Mathieu to allow them to develop some new Physics PBL scenarios to add to the site, which they did quite enthusiastically! This was in line with Nathaniel Lasry’s wishes when he first launched the project – that the site garner the interest, participation and cooperation of the community.

Olivier and Mathieu designed 10 new problems. Then the CCDMD provided another round of financial support that allowed them to develop 10 more problems, this time with the help of their colleague Alexandre April. The 20 problems that were added to the Physics PBL site were designed in French and then translated into English for the benefit of the entire college network.

Together, Olivier, Mathieu and Alexandre successfully pushed the College Physics PBL site further. When all was said and done, the site has grown to include problems covering all the fundamental notions of the three required Physics courses for the Natural Sciences program.

Olivier emphasizes that when working with the CCDMD, the authors of the project are supported by a solid team. “You get the feeling that you are working as a team and that you are able to go further than you would if you were working all alone.”

For Mathieu Riopel "it’s a pleasure to have the resources to develop educational materials that we can then use in our courses." As an added bonus, the work benefits all of the Physics teachers in the college network (and beyond!).

This work - in the true spirit of sharing - was particularly pleasing to Alexandre April. He also emphasizes that designing the PBL activities was an opportunity to leave his comfort zone and put his creativity to the test. Thanks to the research that he performed for this project, he now has a better understanding of many of the applications of Physics concepts (and other disciplines!). Alexandre goes as far as saying “collaborating on this project helped to make me a better teacher!”

Do you have an educational material development project that you would like supported? Whether it be a textbook, website, educational scenario, video series, simulation project or anything else, the CCDMD wants to lend a helping hand! Submit your project idea to them! But act fast! The deadline for the Call for Projects is March 4th, 2016.

A presentation of the project development process at the CCDMD