This article was first published in French.

The subject of the meeting was an article written by the researchers and published in 2016 in the Pédagogie Collégiale journal: “Is active learning possible outside the classroom?” [PDF]. The article discusses DALITE, a web platform developed by the authors and aimed at supporting active learning (of the “peer learning” type) outside of the classroom.

I attended the meeting, and so I have had the chance to interact with the researchers.

During the “Avec un grand R” activity, we talked about the reality of the researchers, of their motivations for becoming researchers, but also, obviously, of the subject of their article in Pédagogie Collégiale: DALITE.

This strategy is related to the peer learning method developed at Harvard University by Eric Mazur (and put into practice, for example, by Luc Tremblay from Mérici College, who described his experience in a Profweb real life story. The difference is that with DALITE, the interactions between the students happen in an asynchronous manner, through writing. The researchers have measured that DALITE was as efficient to produce “conceptual gains” in the students as peer learning used in a classroom environment, and more efficient than traditional teaching (lectures).

During the “Avec un grand R” meeting, the researchers announced that DALITE could now be integrated in Moodle. For now, the database containing the answer of the students in Physics is in English, but the researchers are interested in translating it, with the help of volunteer teachers.

The researchers have insisted on the fact that DALITE is a tool to integrate peer learning in a class, and not an end in itself. As usual, technology supports pedagogy, and not the other way around.

An invitation to discuss

Hélène Tardif, project manager for the ARC, hosted the meeting.

Christian Barrette, researcher in pedagogy and project manager for the ARC, acted as a reader-critic during the activity. Christian Barrette then asked many questions to the 3 resource persons.

The activity was an invitation to discuss. The participants were warmly invited to ask question to the resource persons, be them about the subject of peer learning, DALITE, or their research activities.

Elizabeth Charles highlighted the relevance of doing pedagogy research in the college network, one of the few possibilities in the world to work with experts in their disciplines that teach and are motivated by pedagogy. She indicated that her international colleagues were envious of her situation. She also mentioned that these latter were very interested by active learning classes from the college network.

At the end of the meeting, Isabelle Laplante, from the CDC, proposed a complementary mediagraphy to participants who would like to know more about active learning methods and the information and communication technologies in teaching. You only need to go to EDUQ.info and to do an advanced research with the following filters: 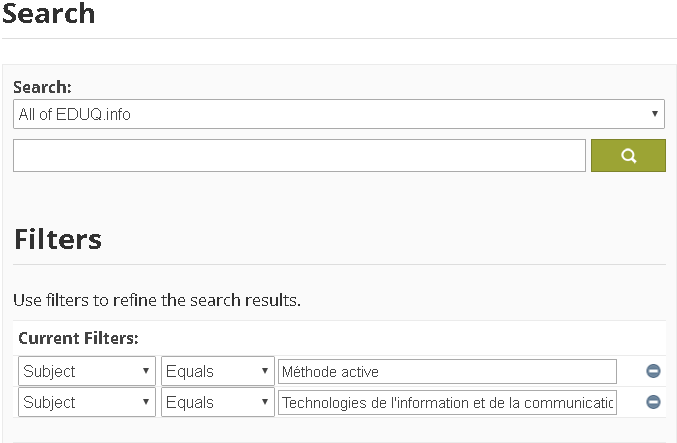 The search to do on EDUQ.info