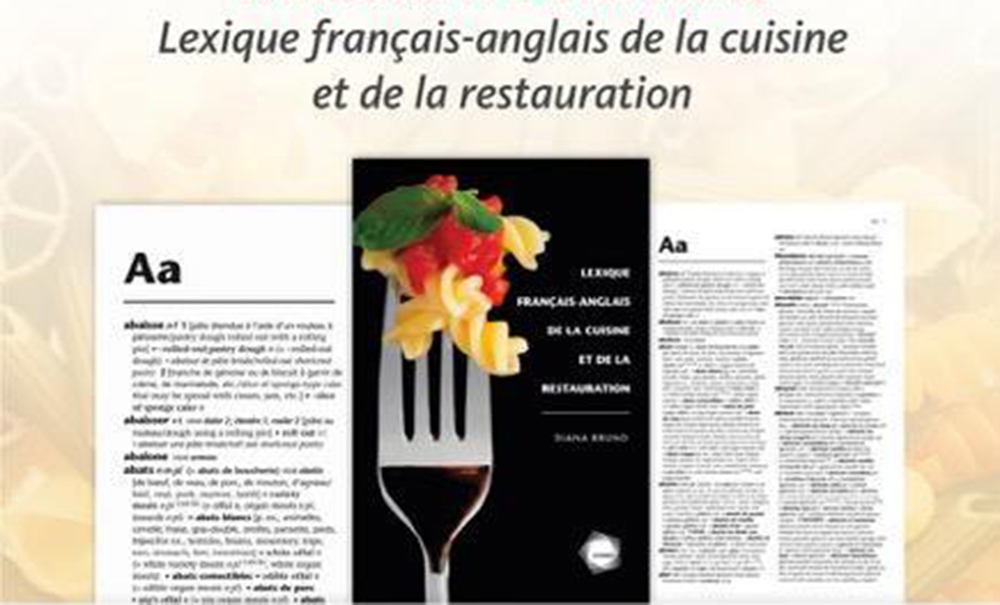 Diana Bruno, who’d been teaching English as a second language (ESL) at the ITHQ, realized there was a real need for a reliable and relevant bilingual lexicon of culinary and restaurant service terminology for Quebec francophone students. She decided to write that book to help them communicate accurately and confidently in English during their studies and internships, and then in the workplace. 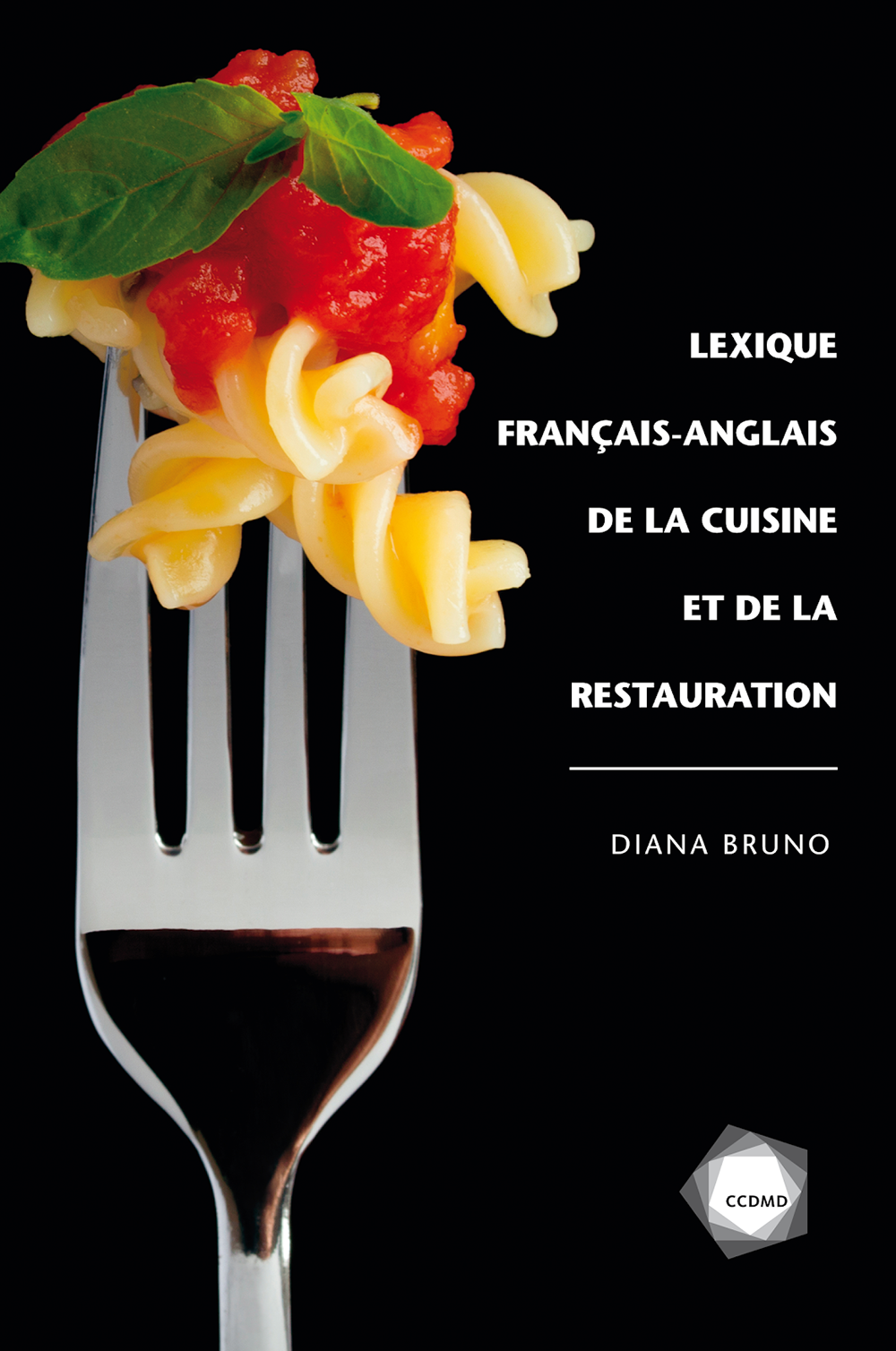 From cover to cover

The book has a French title but it doesn’t necessarily mean that it is only for French speakers; English speakers can use it also. Look up a French or English term using the search function of the digital version. This function somewhat makes up for the missing English-to-French side, which the author ended up having to abandon to meet publication deadlines. 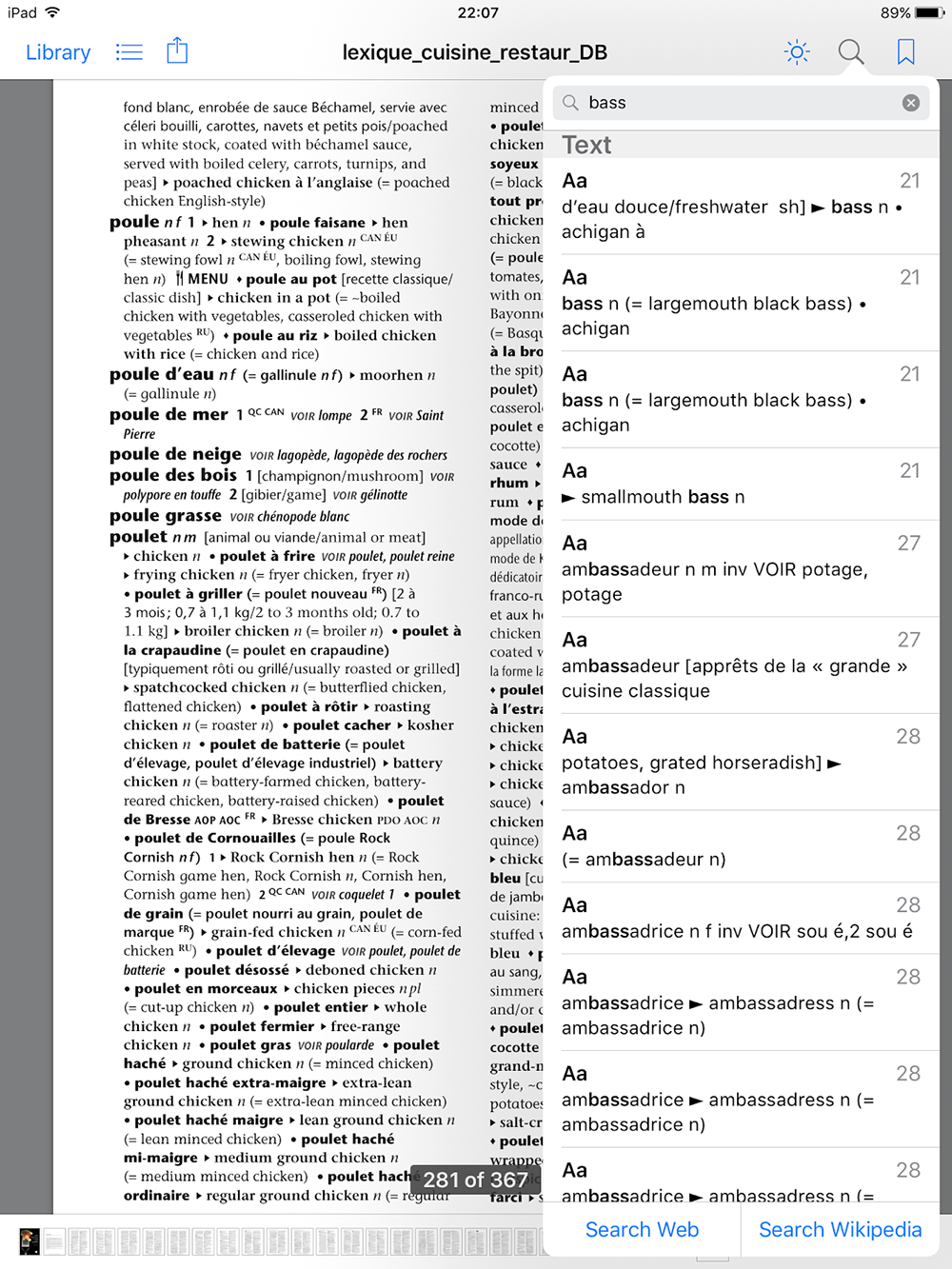 A screen shot of the search function taken with the author’s iPad. The word “bass” was written in the search bar. In class, teachers could use the lexicon on their smart phones.

Screenshot of the full response to selecting the first match for ‘bass’; it’s highlighted in yellow at achigan.

These numbers give you an idea of the scope of the lexicon:

The book covers 35 different themes including basic and specialized terms for foods, ingredients, cuts, cooking methods, preparation methods, styles of preparation (à la florentine), and dedications (Melba).  It also has terms for tastes and textures, courses of a meal, food preparation and service personnel, food service establishments, as well as explanations of dishes in sections called menu and desserts, and more.

A lexicon with a pedagogical slant

The lexicon can be used in many ways. For example, as a classroom exercise or during internships, it will help students translate menus. Hospitality teachers can use the electronic version to quickly answer student questions about a translation in French or English, and ESL teachers and their hospitality students can use it to find targeted grammar and usage notes.

Language teachers in particular will be interested to know that the lexicon provides:

Traditionally much of the terminology related to cooking was influenced by French cuisine and French gastronomy. Most dictionaries and lexicons have not reflected a linguistic reality that is Quebec or Canadian. The lexicon is the first one in this field that does, as well as that of France and beyond. That’s why it provides French terms from both France and Quebec, as well as English terms from Canada, the U.S. and the United Kingdom.

Of course the 14,000 terms in each language can be useful, but certain features such as the usage notes and background information, for example on some famous dishes make for an interesting read.

For instance, did you know that “Peach Melba”, the famous dessert, was created to honour operatic soprano Nellie Melba?

The usage notes included in the book may apply to certain terms in French, others in English.  If you look up the French word:

This is THE reference book for francophone students and French content teachers as well as ESL teachers in restaurant, hotel, or tourism management programs at the college level. And it’s just as useful for restaurant service and culinary arts programs at the professional level, for people in the foodservice sector, and for translators.

As for foodies, who use the digital version of recipes in the kitchen, they will be able to download the e-book version of the lexicon on a digital device and consult the definitions of the gastronomic terms.

Enjoy your meal (and this book, of course)!