Over the last fifteen months, Vitrine technologie-éducation (VTÉ) has demonstrated a significant interest in Fab Labs. In November 2012, André Beaudin-Lecours wrote FAB Labs - Fun with Technology! that I invite you to read again. At the end of this column, she asked, “Could this flagship college be yours?"

One year later, Vitrine technologie-éducation convinced Cégep Bois-de-Boulogne to explore Fab Labs’ pedagogical potential in postsecondary education. Done deal! EchoFab, the first Fab Lab in Québec, is ready to be the trendsetter for an entire new way of looking at technology.

A few weeks later, Marc-Olivier Ducharme, Chief Maker at EchoFab, and his team spent five days at Bois-de-Boulogne in order to help the cégep build its own 3D printer and encouraged community creation of artefacts such as those described in detail in Yves Munn’s column in French. 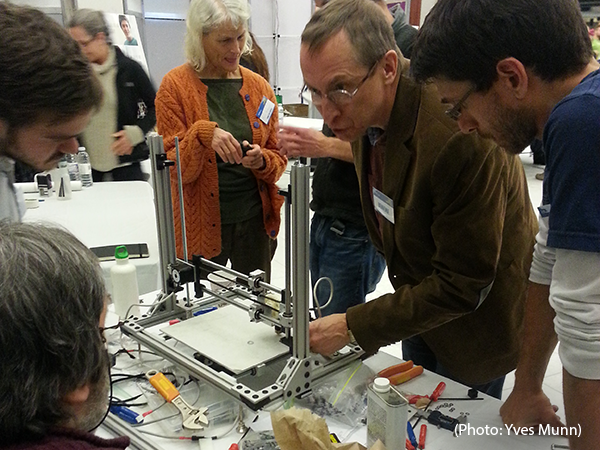 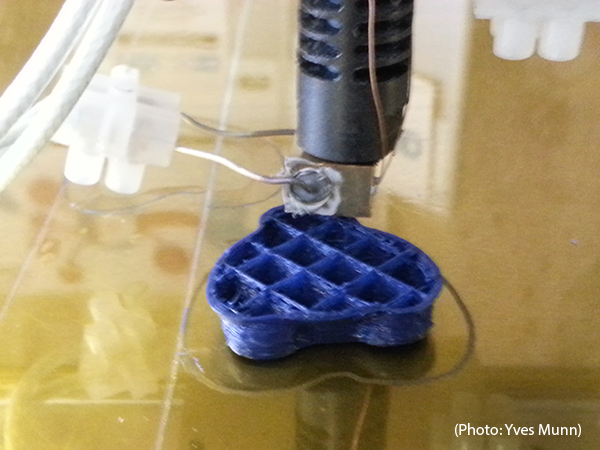 The 3D Printer In Operation

According to The Open University (Innovating Pedagogy 2013, p33), the Maker culture, behind the 3D printing Fab Lab project, is often seen as having the potential to contribute to a more participatory learning approach. Furthermore, it can create new pathways into topics making them more alive and relevant to learners.

At Champlain, it is pretty clear that 3D printing technology is only a means to an end not detracting from the bigger picture. “Maker culture has grown-up outside formal learning structures, and encompasses not only the process of creating specific objects, but also the social and learning cultures surrounding their construction.” (The Open University)

According to “Will 3D printing Change the World?”, a PBS Digital Studios video, “Beyond an initial novelty, 3D printing could have a game-changing impact on consumer culture, copyright and patent law, and even the very concept of scarcity on which our economy is based. From at-home repairs to new businesses, from medical to ecological developments, 3D printing has an undeniably wide range of possibilities, which could profoundly change our world.”

“This is a great opportunity for us to introduce transversal critical thinking about social impacts of technology changes in some of our pre-university and career programs as well as continuing education courses” proclaim both J. Kenneth Robertson, General Director (President), and Donald Shewan at Champlain College.

The newest generation of multi-color and multi-material 3D printers illustrate the pedagogical potential of this technology!

This is only a beginning and a new way to create student involvement.

Does this mean that we will duplicate whatever we want? No. We need to let students think about the value of creation and its related process as well as copyright issues.

Windows 8.1 was designed to support 3D printing. Microsoft has recently released 3D Builder, a new app in order to help students from computer science programs with a catalog of built-in pieces. However, if your students are from 3D modeling programs, Adobe also recently added 3D printing tools to Photoshop (some restrictions may apply) that let students create and edit designs for 3D printing. That being said, your students might be interested in the applied business development aspects like creating their own online 3D gallery, for example.

“Culture is going to change from a passive consumer to an active creator. At Champlain, we want to train our students to support local companies and help them to become global” says Donald Shewan. Beyond the technology, it means integrated vision, projects and collaboration between teachers and various colleges.

Would a 3D manufacturing cooperative among various Quebec cégeps and colleges interest you?