20 New Problems for the Website: Problem-Based Learning for College Physics

The Problem-Based Learning (PBL) approach has been proven to be successful in several different disciplines and physics is one of the them. Searching for problems designed for all 3 fields of physics at the college level, Olivier Tardif-Paradis, Mathieu Riopel and Alexandre April, of Cégep Garneau, launched themselves into a 2-year project of creating new problems for the existing website by the CCDMD, Problem-Based Learning for College Physics: A Website for Life-like Activities.

With the support team of CCDMD and funding from both the CCDMD and Cégep Garneau, these ambitious teachers created 20 new problems, including guides for teachers and students. The site now offers PBL activities in Mechanics, Electricity and Magnetism, and Waves and Modern Physics. All 34 problems are available in French and English. 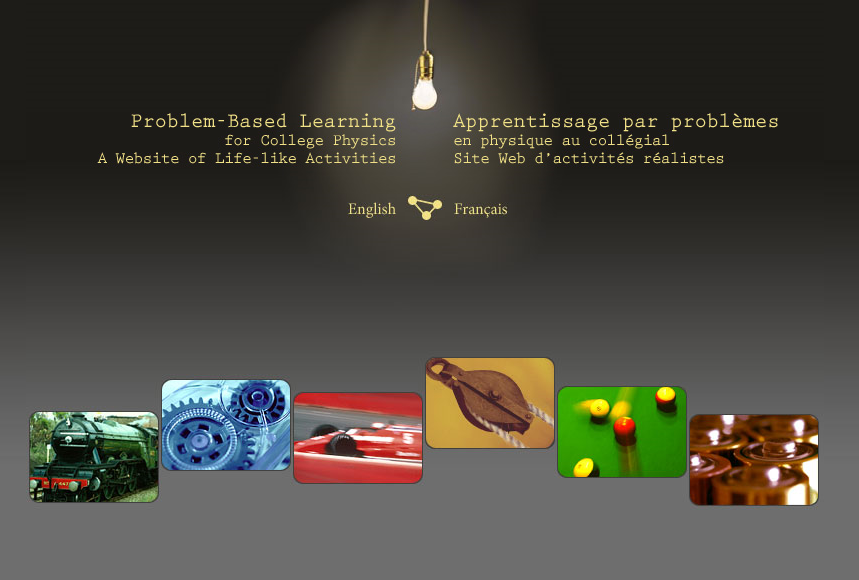 How It All Got Started

Mathieu and Olivier became familiar with the CCDMD tool in 2008, when it was created. Using the Problem-Based Learning approach requires having a bank of problems that are appropriate for the competencies of a course. It is time consuming and this reality is what brought the creator of the tool, Nathaniel Lasry, to develop the resource with the CCDMD. You can read about his experience in this Profweb Real Life Story.

In 2008, there were 14 problems available on the site, all related to mechanics. As Mathieu and Olivier were teaching in other fields of physics, these problems were not appropriate for them. After attending a presentation by the CCDMD, Olivier got the idea of expanding the tool to provide problems in all areas of physics for college courses and he asked Mathieu to join him.

It should be noted that the website invites teachers to submit problems, to build up the bank of available material. Not many teachers had done this between the creation of the site in 2008 and 2014, when Olivier and Mathieu began their project. This is understandable considering the amount of time it takes to create a solid, complex problem, with the addition of each problem providing a Student’s Guide and a Teacher’s Guide.

During the fall of 2013 Olivier and Mathieu contacted Nathaniel Lasry, to discuss their project. With Nathaniel’s approval, they submitted their project proposal to the CCDMD and Cégep Garneau. The project got underway at the beginning of 2014, with funding from Cégep Garneau, while funding from the CCDMD was confirmed a few months later. During the first year of the project they worked hard producing 10 problems. During the second year, with renewed funding from the CCDMD and the addition of Alexandre to the team, 10 more problems were created. 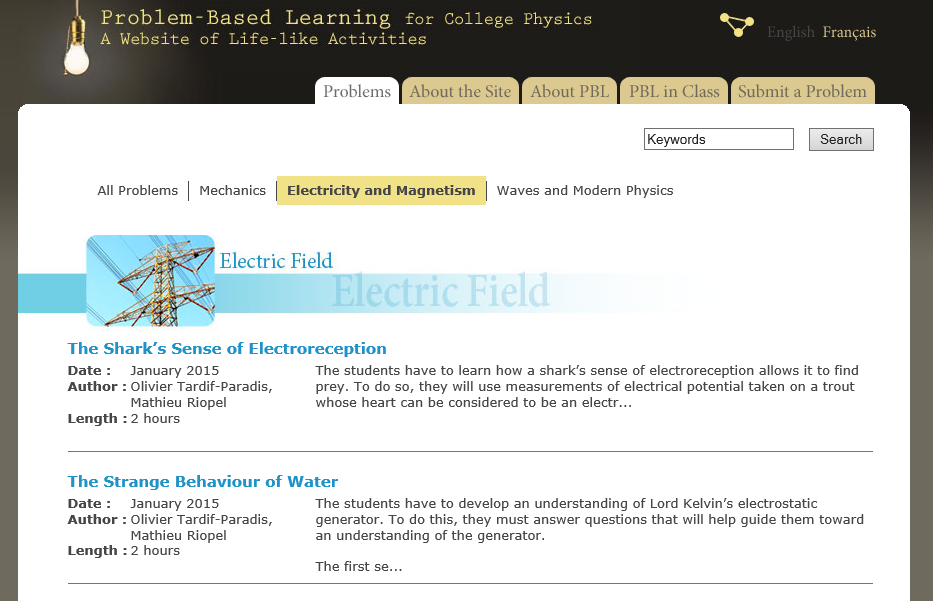 The 3 categories of problems: Mechanics, Electricity and Magnetism, Waves and Modern Physics now available, for a total of 34 problems.

Each of the teachers involved brought their strengths and experiences, creating a dynamic team. Their first step was to identify which subjects were missing from the existing list of problems. Next, they made a list of potential topics, stemming from their personal and professional experiences: Alexandre has a PhD in Optics, and has taught physics courses in different programs (such as Geometrical Optics in the Optical Technologies Program) , Olivier and Mathieu work with the Centre de démonstration en sciences physiques, Mathieu has taught physics courses in different programs (such as Biomechanics, in the Physiotherapy Technology Program), and Olivier loves science history. They saw an opportunity to broaden students’ horizons by adding elements of science, culture, history and citizenship to each of the new problems.

Here are a few titles of problems that were developed:

Each problem is accompanied with a Student’s Guide and a Teacher’s Guide, which had to be developed for each new problem. The Teacher’s Guide explains how to use the problem step by step, including explanations of how to prepare and use a demonstration, if necessary. It also provides answers to the questions found in the Student’s Guide along with a suggested evaluation grid for summative evaluation. 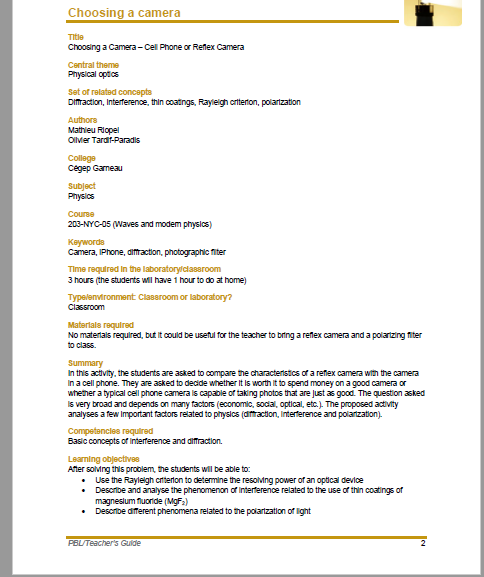 The Teacher’s Guide begins each problem with a detailed summary of the objective of that problem and how it can be used. 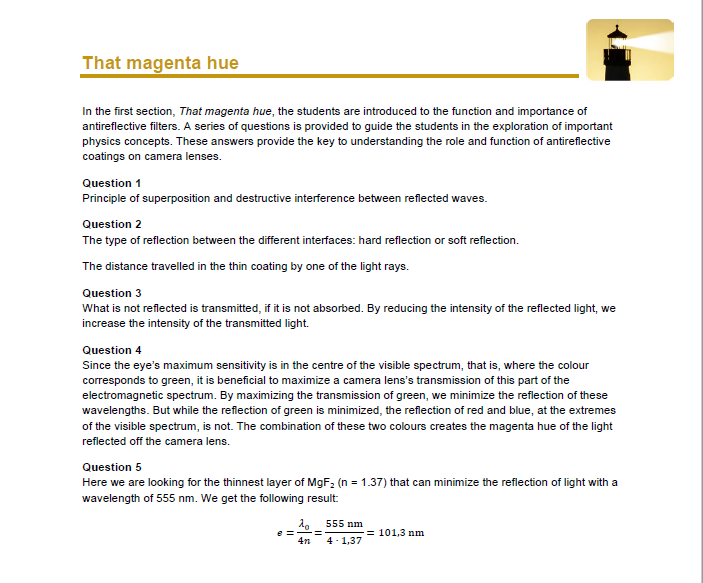 Each section of the Teacher’s Guide provides answers to the questions that students are working on.

The Student’s Guide provides background information for each problem and guides them to drawing final conclusions. It comes as a Word Document, allowing teachers to make modifications and use the problem differently, while allowing students to work directly in the document. 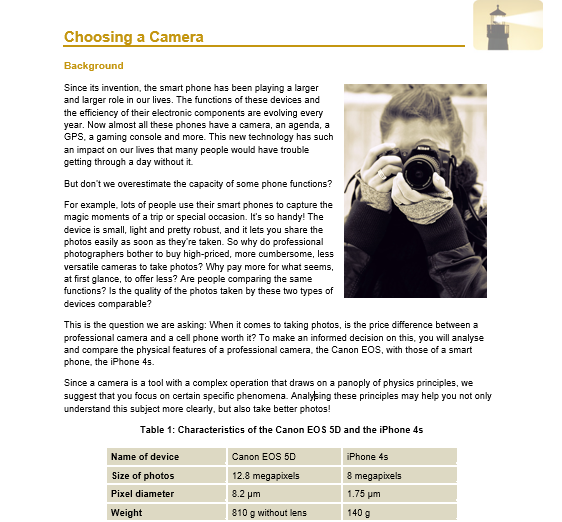 Background information in the Student’s Guide provides essential information for the problem. 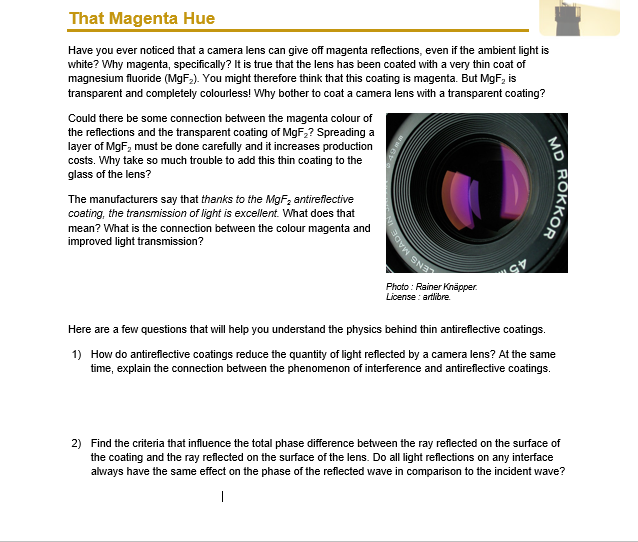 The accompanying page of questions from the Student’s Guide, as seen above in the Teacher’s Guide.

Using the PBL approach often involves the teacher convincing students that they will learn the course competencies. Olivier’s students in a Waves course were used to the traditional approach and were worried about their level of understanding with this new method. He spent time explaining the concepts behind this approach, and slowly but surely, they warmed up to it. The positive results from the first exam gave students confidence in this pedagogical approach.

Alexandre finds the problems very useful, however he uses them for inspiration and modifies them to suit his courses. He finds that students are amazed at how much they have learned when they reach the end of a problem. Their thought process and overall learning have also gone further. Mathieu has used only a few of the new problems, but he is pleased with the results. He is delighted to have material that he knows will be of interest to the students. Olivier has used problems from all 3 fields and is very satisfied.

These experienced PBL teachers have a few recommendations for teachers who want to start using the problem-based approach:

I have never had a bad PBL class, but I have definitely had bad traditional classes.Olivier

The completion of this project has resulted in a total of 34 problems now available on the site, covering 3 different fields of physics. The site is bilingual, thanks to the CCDMD taking care of translating all the material produced for the problems. This web based resource has also proven to be popular outside of the province of Quebec, with 3177 teachers from 84 countries having used the site for their PBL courses! A success indeed!

Alexandre April received his PhD in Optical Physics in 2009 from Université Laval. He began teaching at Cégep Garneau in 2010. In 2013 and 2014 he worked on another collaboration project with Olivier. They wrote problems for the companion website for text books by René Lafrance.

Mathieu Riopel has been teaching since 2008. After 2 years at Cégep de Trois-Rivières, he then came to Cégep Garneau where is has been teaching for 6 years. He is very involved in the Centre de demonstration en sciences physiques, where he develops problems and experiments for secondary school teachers. He completed his Teaching Certificate with Olivier, where one of their teachers used the PBL approach.

Olivier Tardif-Paradis taught at Cégep de Victoriaville for 3 years before coming to Cégep Garneau in 2011. He is also very involved in the Centre de demonstration en sciences physiques, developing problems and experiments, as well as giving presentations. As mentioned, he also wrote problems for the companion website for text books by René Lafrance.

Currently one question without answers. You might be able to help!